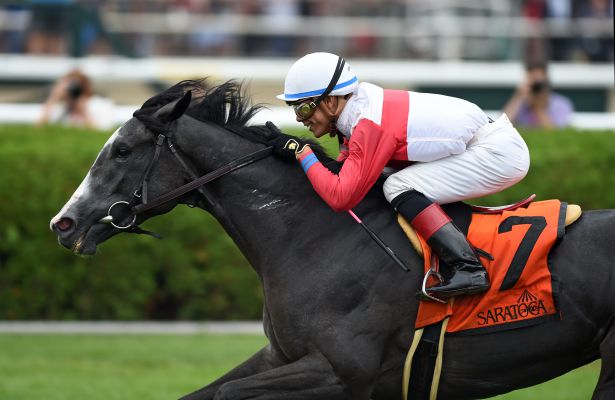 Stuart S. Janney III’s On Leave will look to notch her second consecutive stakes win when she competes against a talented nine-horse field in the Grade 3, $200,000 Athenia Stakes for fillies and mares 3-years-old and up on Sunday at Belmont Park.

The penultimate of the 18 total graded stakes for the Belmont fall meet, the 41st running of the Athenia, contested at 1 1/16 miles on the turf, will see On Leave looking to build on her half-length score in the One Dreamer at one mile and 70 yards on September 1 at Kentucky Downs.

The 5-year-old War Front mare will be making her 16th straight stakes appearance and has finished on the board in six of her last eight starts, including second in the Grade 2 Churchill Distaff Turf Mile on May 5 at one mile. On Leave has breezed four times at Belmont since September, including a four-furlong work in 48.44 seconds on October 14 on the main track that encouraged Hall of Fame trainer Shug McGaughey.

“She’s looked better than ever,” McGaughey said. “If we get a little luck with the weather and the course dries up somewhat, I think she’ll be tough.”

On Leave, making her first Belmont start since running a solid fifth in the Grade 1 Longines Just a Game on June 9, will have the services of jockey Joel Rosario, drawing post 9. McGaughey said he expects the Kentucky homebred to continue playing to her strength in coming off the pace.

“The distance will be fine for her,” he said. “I think she’ll sit off the lead. Rosario will ride her and he likes to do that, so I think it’ll work out fine.”

Trainer Arnaud Delacour said the increase in distance could be beneficial, along with a return to Belmont, where Hawksmoor has two wins and a second-place finish in three starts, including victories in last year’s Grade 2 New York and Grade 3 Beaugay.

“She’s doing very well and I think she ran a good race last time, I’m just not sure the mile is the optimal distance for her,” Delacour said. “I’m very happy to see her go a mile and a sixteenth. She came back well and had two good breezes. She can adapt and has enough tactical speed where, if she doesn’t make the lead, she can get in position.”

The Irish-bred 5-year-old posted two group stakes victories in Europe before arriving in the United States as a 3-year-old.

“She runs a good race pretty much every time. She’s a pretty consistent filly,” Delacour said. “Last year, she won the New York on firm turf and the Beaugay [on yielding], so I think she likes it at Belmont.”

Manny Franco, aboard for the Noble Damsel, will have the return call from post 2.

“I’ll speak to Manny [about the trip], but after he rode her the first time, he knows her now and hopefully he can adapt his riding to the situation,” Delacour said.

New Money Honey, the winner of the Breeders’ Cup Juvenile Fillies Turf in 2016, will be looking for her first stakes win since the 2017 Grade 1 Belmont Oaks. Owned by e Five Racing Thoroughbreds, the 4-year-old Medaglia d’Oro filly will be cutting back in distance after running second to Starship Jubilee in the Grade 2 Canadian on September 15 at Woodbine. Hall of Famer Javier Castellano will ride from post 3.

Inflexibility, third in the Canadian, will be running at Belmont for the first time since a second-place effort to stablemate A Raving Beauty in the Grade 3 Beaugay on May 12. The 4-year-old daughter of Scat Daddy will have the services Hall of Famer John Velazquez out of post 6.

The French-bred Rymska, winner of three of her last four starts, will return to stakes company after finishing second by a nose to Candy Store in an optional claimer on August 31 at the Spa off a nine-month layoff. Irad Ortiz, Jr. will break from post 1.

Mythical Mission will make her Belmont debut off two impressive efforts, including her first stakes win when she rallied to edge Hachi by a neck in the West Virginia Senate President’s Cup on August 4 at Mountaineer on firm turf before running second in the All Along on September 22 at Laurel Park on yielding turf.

Owned by Sam-Son Farm, Mythical Mission, who carries a 4-4-4 ledger in 15 career starts, will ship to Belmont for the first time for trainer Graham Motion. Jorge Vargas, Jr. will be in the irons from post 5.

Indian Blessing finished third in both the Ballston Spa and the Grade 1 First Lady on October 6 at Keeneland in her first two starts since arriving from Europe for trainer Ed Walker. The British-bred earned identical 97 Beyer Speed Figures for those two efforts.

The 4-year-old Indian Blessing won the Group 3 Sparkasse Holstein Cup in Hamburg, Germany on July 4 and finished third in the Group 3 Queens Plate Oak Tree at Goodwood in Great Britain before shipping across the Atlantic. Feargal Lynch will ride from post 4.

Rounding out the field is Candy Store, for trainer Christophe Clement, out of post 8; and Pas de Soucis, an Irish-bred 5-year-old trained by Jorge Abreu, from post 7.

Track that hosts Preakness should be demolished

Dettori the big attraction at Lingfield with three rides | Horse...

A no-deal Brexit will cripple Formula 1 and horse racing in...