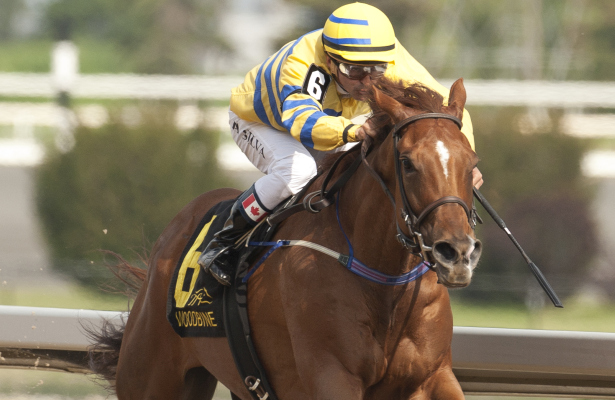 Pink Lloyd, Canada’s reigning Horse of the Year, will be among the numerous stars in the spotlight over Woodbine Mile weekend as he headlines a full field of sprinters set to run in the Grade 3, $125,000 Bold Venture Stakes featured on Saturday’s undercard.

Trained by Hall of Famer Robert Tiller for Entourage Stable, the 6-year-old millionaire son of Old Forester will be aiming for his fourth graded stakes win in the 6-1/2-furlong main track event for horses three years old and up. He has been assessed as the even-money favorite on the morning line.

The Bold Venture attracted a field of 10, one of the biggest Pink Lloyd has faced in quite some time with some old and new rivals in the mix.

“Well, it could be a traffic jam, but he’s in very good shape and that’s why we’re running him,” said Tiller. “He’s got to carry 125 pounds, and he’s done that before. I’ve always liked six and a half furlongs for him better than six so I believe we’re coming up to it just right. Hopefully he’ll have a good trip. If he has the trip, I think he’ll be very tough.”

The field includes Goldmart Farms and Royal Laser Racing’s Kingsport, who earned his second Shepperton Stakes title over 6-1/2 furlongs to interrupt Pink Lloyd’s winning ways that subsenquently resumed in the Grade 3 Vigil then the OLG Kenora Stakes amid Canadian Yearling Sales Stakes night last time out on August 29. Kingsport also won that night over 1-1/16 miles defeating three-time OLG Elgin Stakes champion Melmich. The Sid Attard trainee had also played the role of giant slayer taking his second Sir Barton Stakes at 1-1/16 miles ending his 2017 campaign over Mr Havercamp, who is a contender in the Grade 1 Ricoh Woodbine Mile on Saturday.

“Every year when he comes back, he comes so heavy and he takes forever to get ready. He’s just a big horse, it doesn’t matter how you train him,” noted Attard. “But this year, he came around really good right away and he’s been feeling good.”

Following his Elgin win, the sharp 6-year-old son of Milwaukee Brew reverts back to the sprint distance here.

“We really don’t like to go back and forth, but you have to run where you can get,” said Attard. “I don’t think it bothers him really, it depends how they’re going to race up front.”

“It depends how the race comes up, we just have to play it by ear,” he said of Kingsport’s chances facing sprint champion Pink Lloyd again. “He’s a really nice horse, Bob Tiller’s horse. You can’t take nothing away from him.”

Other contenders in the race include defending Bold Venture champion Ikerrin Road and runner-up Boreal Spirit. Owned by Alpine Stable and trained by Vito Armata, Ikerrin Road enters this year’s edition off a six-furlong victory in an allowance race at Woodbine on August 18.

A multiple stakes winner in his sophomore season last year, Chiefswood Stable’s homebred Yorkton most recently finished a game second behind Pink Lloyd in the Vigil.

Joey Gee Thoroughbreds’ Sweet Little Man has hit the board in his last four starts on the turf for trainer Jim Ensom. Last time out in his stakes debut, the 8-year-old Jazil gelding finished third over seven furlongs of yielding turf in the Grade 2 Play the King won by Mr Havercamp.

The Bold Venture is scheduled as the 10th of 12 races on Saturday’s stellar stakes program. First race post time is 1 p.m. Here is a look at the complete Bold Venture field in post position order:

Big names may ship in for Remington’s Springboard Mile