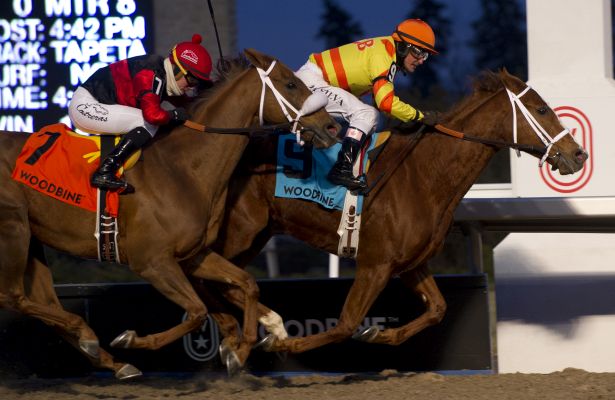 The Kevin Attard-trained 7-year-olds Pumpkin Rumble and Melmich provided an exciting finish to the 2018 stakes season at Woodbine with the former fending off
the latter in the Grade 3 Valedictory on Sunday.

Owned by Al and Bill Ulwelling, Pumpkin Rumble defeated 2015 champion and two-time runner-up Melmich in the $125,000 co-feature contested over 1 3/4 miles on the main track.

“I was just mute and just kind of watching them and I was hoping nobody else was coming from behind,” said Attard of watching his two chestnut trainees battle to the wire. “It’s just nice to
see two good horses.

“Melmich is a great horse, we’ve enjoyed a lot of success with him and he fought really hard today. I think he was the old Melmich that people know. And Pumpkin Rumble obviously is a good horse
himself too. He’s run great races in North America against some tough competition.

“I’m very happy for the owners – first graded win – and they’ve put a lot of confidence in me to give me a lot of their horses to train and we appreciate that.”

The thrilling stretch duel ensued as the pair swept past another stablemate A. A. Azula’s Arch, who set an unpressured pace. Coming off a Grade 3 Maple Leaf Stakes win when facing older distaffers,
the Attard-trained 3-year-old filly A. A. Azula’s Arch led the field of nine to the final turn.

With Eurico Rosa da Silva aboard, Pumpkin Rumble stalked the pace outside in fourth-place and forged ahead at the top of the stretch with Melmich and Luis Contreras in hot pursuit. They took
off from the rest of the field in a head-to-head battle down the lane, which ultimately ended with Pumpkin Rumble persevering by half a length in 2:56.16.

After the race, Da Silva acknowledged his classy competitor, one he had previously partnered with and gave him a run for his money today in the stretch.

“Melmich is an amazing horse,” praised Da Silva, who picked up his 29th stakes win of
the meet. “It could go any way there. At the eighth pole there, it was looking like Melmich was going to take it. My horse came back, he dug in – I’m so proud of him – he dug in and he won the race.”

Pumpkin Rumble has won half of his eight starts this year, including three in a row.

“He kind of ran two clunkers [in the summer] and he had run so hard and so well earlier in the season so we knew this race would be up his alley and we
wanted to freshen him up and we gave him some time off at the farm and brought him back,” said Attard. “He’s come back with revenge.”

A. A. Azula’s Arch faded to fifth while English Illusion, Bowsprit, Ethical Funds and Seeking Albert rounded out the order of finish.

Late Night Pow Pow extends her streak in What a Summer...

Ben Pauling’s Willoughby Court the star of the show at Cheltenham...