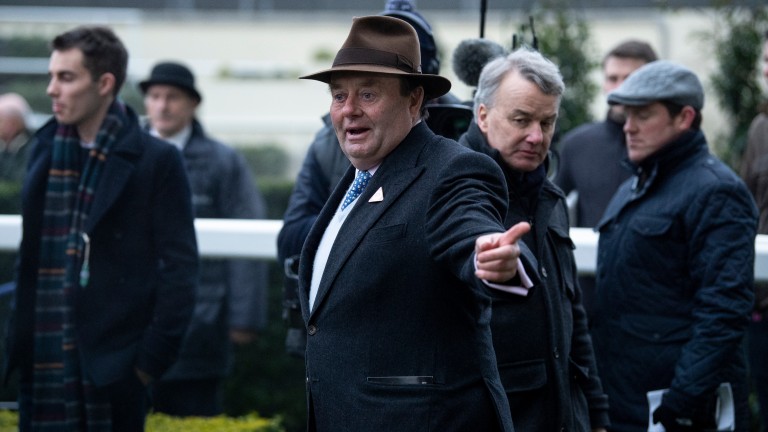 Nicky Henderson: pointing the way to the next 100 winners after completing his quickest century with a four-timer on Saturday

Nicky Henderson reached his tenth seasonal century in the last 11 seasons with the final winner, Downtown Getaway at Ascot, completing a four-timer on Saturday.

Success in the finale at Ascot followed Altior’s victory in the Clarence House Chase for Henderson – he also won with Before Midnight at Taunton and took Haydock’s Supreme Trial with Mister Fisher.

“I think that’s our quickest hundred,” said Henderson, who still trails Paul Nicholls in the trainers’ table. “I can remember one of my first coming at Easter one year.”

What is even more impressive is that the latest 100 has come at an amazing 31 per cent strike-rate which Henderson elaborated on.

“It is amazing as we got going late this year with the weather and we are still waiting for proper rain, then it will be full steam ahead for the rest of the season,” added the champion trainer, who has been known to ease off his stable stars ahead of building up for the Cheltenham Festival.

As such Henderson is keen to run dual Champion Hurdle winner Buveur D’Air in the Contenders Hurdle which he has won for the last two years at Sandown in two weeks time.

Paddy Power shortened Henderson to 1-5 from 2-7 to win his sixth trainers’ title and pushed out Paul Nicholls to 3-1 from 9-4.

Henderson, whose best tally was 167 in the 2011/12 season, said:”It’s nice to get it done but it slightly feels like we are only half way through the season with the ground we have had and almost certainly we have run less to get to the 100.”

“I don’t set targets but always like to beat previous totals. Numbers are important and so are the wins for the lesser guys as it’s important for them to have their days and winning a moderate race with a moderate horse gives me as much pleasure.”