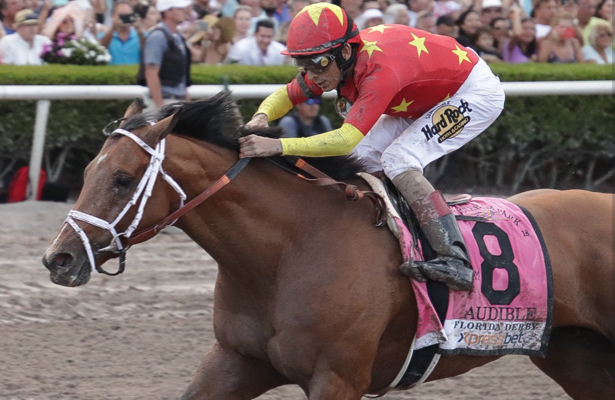 The Cherokee Run for 3-year-olds will run at seven furlongs on the main track as Audible tunes up for a potential start in next January’s Pegasus World Cup.

Audible has worked consistently since mid-September following a controversial freshening, one that saw him sidelined before a potential Belmont Stakes start against Justify, with which he shares common ownership.

The Into Mischief colt’s latest breeze Friday measured five furlongs in 1:01.19 at Belmont Park, where he went in company with the fan favorite Patch. Pletcher told DRF it “seems like he’s rounding into form.”

Audible emerged from state-bred company in New York to look dominant in a pair of Kentucky Derby preps, winning both Gulfstream Park’s Holy Bull (G2) and Florida Derby (G1) with authority. On the first Saturday in May he was just a head away from catching Good Magic for the runner-up spot.

Nominations close Saturday for the $200,000 Cherokee Run, which will be run for the first time this year. According to Churchill Downs’ condition book it will be the second of 12 races on Breeders’ Cup Saturday.

Patch (outside) & Audible worked 5F in 1:01.19 at #BelmontPark on October 19th for trainer Todd Pletcher. View more of your favorite stars on-demand at https://t.co/vCZgVVRYIS pic.twitter.com/Dzi8VkIagn