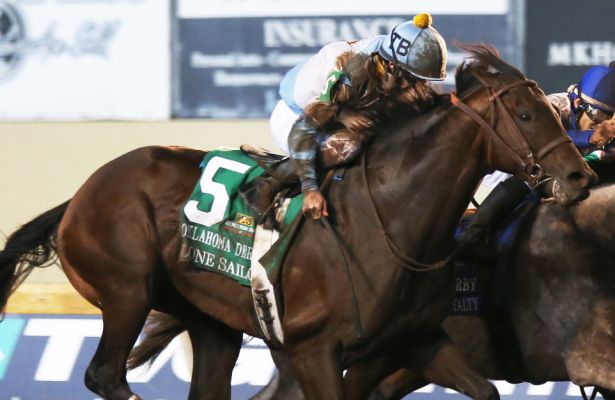 G M B Racing’s 3-year-old colt has hit the board multiple times in graded stakes company, including a show finish in the Grade 1 Haskell Invitational, and finally got up in time for a nail-biting photo finish in the Oklahoma Derby. It was his second win in 14 starts.

“We’ll probably roll the dice, try one of the Breeders’ Cup races. We’re looking at the Classic, as well as the Dirt Mile,” Amoss told the DRF. “There’s still a lot of moving parts as far as where we end up. I realize we’re taking a major step forward here.

“I can’t emphasize enough what having a killer instinct — as he had in his race in Oklahoma as opposed to his other races leading up to it — has meant to us moving forward. This is what we were waiting for. It was a breakthrough in his understanding of racing, not just for this race, but for the future. It’s exciting.”

The Classic and the Dirt Mile both run Saturday, Nov. 3. The Breeders’ Cup will be hosted by Churchill Downs this year, the home base for Lone Sailor.

Matt Chapman says goodbye to two stars of the season and...

Horse racing legend Lester Piggott, 83, rushed to hospital over the...