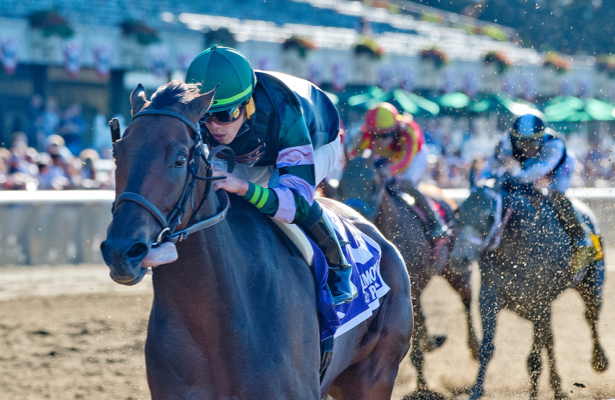 Diversify was fifth in his last race, the Sept. 29 Jockey Club Gold Cup (G1) at Belmont Park, but emerged as a leading older horse before that, breaking the two-minute mark in July’s Suburban (G2) before cruising on the front end again in Saratoga’s Whitney (G1).

“One of the criteria for choosing Rick’s replacement was finding a younger, successful, up-and-coming trainer, partly because my daughter Lauren is the heir apparent and we all thought that made the most sense,” Ralph Evans told the Daily Racing Form’s Mike Welsch. “After discussing several options, we decided to hire Jonathan, in large part because we know Rick really had a lot of respect for him and especially the job he did developing Catholic Boy.”

Thomas, who trained Catholic Boy to Grade 1 victories on turf and dirt in 2018, described this as a “humbling situation.”

Diversify, a New York-bred son of Bellamy Road, has won 10 of 16 career starts and earned nearly $2 million when trained by Violette, who died in October at age 65. Violette saddled 870 winners, but his

legacy transcends those results. He was known for advocating for horsemen, particularly in New York, where he opened his stable in 1983.

Race plans will be determined later for Diversify.

Racing UK - International - December 24, 2017
0
Wayne Lordan picked up his second winner of the 2014 Royal Ascot meeting on board Slade Power in the 2014 Diamond Jubilee Stakes. To...

The Latest: Horse races cancelled in North Texas due to heat

Down on the Knavesmire

Three longshots to fill your pockets at Kempton and Redcar

Vale Dori saves the day for Baffert with win at Santa...