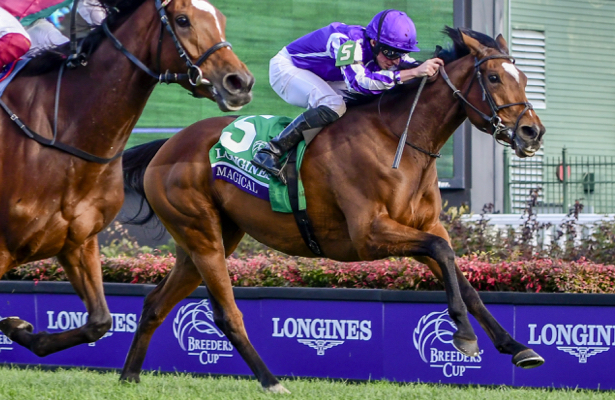 With the main acts of Accelerate, Gunnevera and Audible gearing up for the Pegasus World Cup, the series’ new turf race also appears to have its top contender.

According to The Thoroughbred Daily News’ Bill Finley, Magical, the 3-year-old filly who finished second by just 3/4 of a length to Enable in the Breeders’ Cup Turf, is probable to start in the $7 million Pegasus World Cup Turf on Jan. 26 at Gulfstream Park.

Magical, a daughter of Galileo trained by Aidan O’Brien, would assume Coolmore’s spot in the race. The worldwide breeding and racing operation also has a spot in the $9 million race on dirt to fill following Mendelssohn’s recent retirement.

In addition to her Breeders’ Cup try, Magical is a multiple group stakes winner who entered November’s championships off a victory in Ascot’s British Champions Fillies & Mares Stakes (G1). She also won Group 2 stakes at ages 2 and 3.

Magical nearly out-dueled her older foe, Enable, in the Breeders’ Cup, with the two separated by only a head in deep stretch before the champion edged forward. It was another 9 3/4 lengths back to third-place finisher Sadler’s Joy.

While the Pegasus’ purse is higher than any European race, Mike Rogers, president of The Stronach Group, which operates Gulfstream, told The TDN there has been difficulty in luring contenders from the continent for the first Pegasus World Cup Turf.

“Maybe it’s out fault because we were late in announcing this race, but we’ve been told by the Europeans if they had a little more time they could have prepared to run in the race,” Rogers told The TDN. “We’re committed to this turf race. I think you’ll see more Europeans put it on their calendar in the future.”

According to the report, Kukulkan, the unbeaten Mexican Triple Crown winner who also took last weekend’s Clasico del Caribe at Gulfstream, is now possible for the Pegasus. While undefeated, Kukulkan has yet to face top competition and registered a 71 Beyer in his most-recent start.

Gronkowski To Resume Training Next Week, Point For Belmont Stakes –...