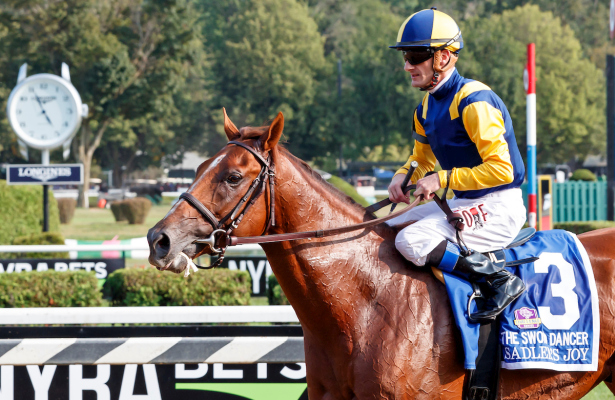 Woodslane Farm’s multiple graded-stakes winning millionaire Sadler’s Joy, beaten less than a length in each of his last three starts, will be after some favorable racing luck when he returns as the defending champion in Saturday’s Grade 1, $1 million Sword Dancer at Saratoga Race Course.

The 44th running of the 1 ½-mile Sword Dancer for 3-year-olds and up on the inner turf is one of seven stakes, six of them Grade 1, worth $4.95 million in purses on a blockbuster 13-race program highlighted by the 149th renewal of the $1.25 million Travers Stakes.

“He’s coming into the race looking fantastic and training as well as he’s ever trained all year round. He’s just been a little unlucky,” trainer Tom Albertrani said. “It’s just been a couple of tough beats, but the horse shows up. He’s there every time and hopefully we encounter a good trip and he comes back and runs the same race he has been.”

“Last time I think the soft turf definitely compromised him. Javier came back and said when they were making the turn into the three-eighths pole, he could feel he just wasn’t getting a good hold of it. As soon as he straightened out for home he came flying,” Albertrani said. “It just goes to show you how strong a kick he really has. I’m hoping for firm ground. He’ll run over anything, but firm ground is definitely what he wants. We just have to get another good trip and hopefully he gets it done.”

Sadler’s Joy will be facing a familiar cast of characters in the Sword Dancer, including Bowling Green dead-heat winners Channel Maker and Glorious Empire, Manhattan winner Spring Quality, Man o’ War winner Hi Happy and Bigger Picture, third as the only other Sword Dancer holdover from 2017. Castellano returns to ride from the far outside post in a field of 10 at 122 pounds.

“Javier knows him well enough now where he tries to get him rolling a little earlier. It’s just a matter of does he get there or not. You have to time it just right,” Albertrani said. “He did it last year so hopefully we can see that same repeat performance. As long as he brings the same race he has been running, we’ve just got to hopefully be on the other side of the wire.”

Like Sadler’s Joy, La Providencia’s Hi Happy didn’t prefer the soft going in the Bowling Green, giving way to be sixth as the favorite after stalking the pace for six furlongs. The Argentine-bred son of Pure Prize earned his first North American victory in the Grade 2 Pan American March 31 at Gulfstream Park, also run at 1 ½ miles, which preceded his Grade 1 triumph in the Man o’ War. He was third, beaten two necks, in the Manhattan.

“He just didn’t run his race last time on the soft turf. We’re hoping that the turf firms up between now and Saturday. There’s a little rain coming but we just feel like he ran an off race and didn’t care for the course,” trainer Todd Pletcher said. “If you put a line over his last race, he’s been really very good and very consistent. The ground was against him that day.”

Pletcher won the 2006 Sword Dancer with Go Deputy. Hi Happy will be ridden by Hall of Famer John Velazquez from post position 4 at co-topweight of 124 pounds.

“We just kind of let him find his rhythm, wherever that is,” Pletcher said. “He’s capable of settling, or if they’re walking, he’s going to be attending [the pace]. The main thing is to let him get into his rhythm.”

Augustin Stable’s Spring Quality sprung an 18-1 upset in the Manhattan when the 6-year-old Quality Road gelding rallied from far back on the far outside after breaking from Post 13 to nail Sadler’s Joy at the wire. It was his second career graded win, following the Grade 3 Red Smith Handicap last November.

Trainer Graham Motion had planned to run Spring Quality in the Arlington Million August 11, run at the Manhattan distance, but was forced to scratch when the horse came up less than 100 percent following the ship from Motion’s base at the Fair Hill Training Center in Elkton, Md.

“He got very dehydrated and he got an infection. [It was] a very mild infection, but his system wasn’t working properly so, obviously, I couldn’t consider running him. It happens,” Motion said. “It’s a tough trip to Chicago. It’s one of the longest trips we do without flying, and I think sometimes we take it for granted how tough these trips are for these horses. [Since then] things have gone relatively smoothly.”

Spring Quality shows a pair of five-furlong works over the Oklahoma training turf course since arriving in Saratoga, most recently going in 1:02.88 on Monday. Hall of Fame jockey Edgar Prado returns for his seventh straight ride, breaking from Post 2 at 124 pounds.

“One of the reasons I went to the Million was because it was a mile and a quarter, which was the same distance he’d won at, but I don’t think the mile and a half should be an issue for me. He’s a horse that acts like he’ll handle it,” said Motion, who won the Sword Dancer with Better Talk Now (2004) and champion Main Sequence (2014). “I never really thought that it would be a problem. He’s gone a mile and three-eighths. I’m very comfortable with how he’s done since he’s been in Saratoga. He hasn’t really missed a beat.”

Another Grade 1 winner in the Sword Dancer is Three Chimneys Farm’s Funtastic, who led all the way in a half-length upset at 23-1 in the 1 3/8-mile United Nations June 30 at Monmouth Park. It was the second straight win for the 4-year-old More Than Ready colt in his graded debut, who was immediately pointed to this spot by Saratoga meet-leading trainer Chad Brown.

“He’s had a little bit of a gap between the races, but he’s been training particularly well. We’ve had this race in mind all along. I didn’t want to run him in between. He’s kind of a light-framed horse and too much racing might be counterproductive for him,” Brown said. “He’s legit. I know he was a big longshot in the U.N. and he surprised a lot of people but he had been training really well and he’s a pure mile and a half horse. He’s got the pedigree, and he doesn’t necessarily need the lead, either.”

Wachtel Stable and Gary Barber’s Channel Maker broke through with his first graded victory in the Bowling Green after being beaten a length when both third in the Grade 1 Frank Kilroe Mile March 10 at Santa Anita and second in the Grade 1 Hollywood Derby last November at Del Mar.

Channel Maker has run at 1 ½ miles twice in his 18-race career, both last year. He won the third leg of Canada’s Triple Crown, the Breeders’ Stakes, on Woodbine’s turf course and then was sixth facing older horses in the Grade 1 Turf Classic Invitational last fall at Belmont in his subsequent start.

“He is doing great,” Mott said. “We’re going another eighth of a mile from the last one. It’s probably stretching him a little bit, but he ran a mile and three-eighths pretty well last time. He’s really doing very well and feeling very good with himself. We expect him to run good, but whether that’s good enough to win or not we don’t know.”

Completing the field are Grade 1 winner Bigger Picture, fourth by a length in the Bowling Green; dead-heat Bowling Green winner Glorious Empire; Highland Sky, beaten a neck in the 2016 Grade 1 Belmont Derby and fifth last out in the Bowling Green; Grade 3 Arlington Handicap runner-up Revved Up; and British Group 2 turf winner Seahenge, making his first start since finishing fifth in the Grade 3 Dwyer July 7 at Belmont.

Grunt among the entries for the $5m All-Star Mile