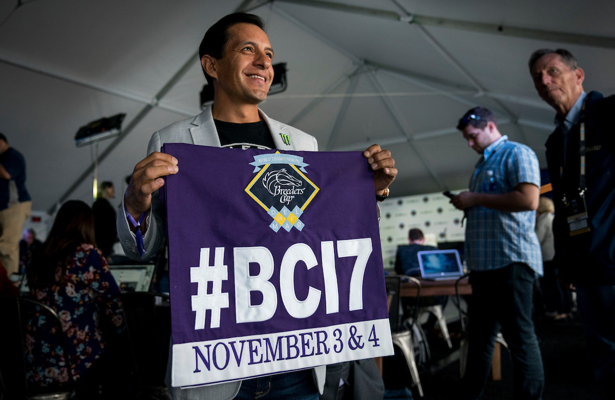 It’s light years from American Pharoah, California Chrome and Stellar Wind — champions all — but relatively speaking, Victor Espinoza and Tribalist are quite a team.

The Hall of Fame jockey, the regular pilot on each of the aforementioned three Eclipse Award winners, has ridden Tribalist in all of his eight career starts, never finishing out of the money, with four wins, two seconds and two thirds.

Espinoza will be aboard the seven-year-old gelded son of the late Tribal Rule again in Monday’s New Year’s Day feature, the $75,000 Joe Hernandez Stakes for four-year-olds and up at about 6 ½ furlongs on turf.

“He tries every time he runs,” Espinoza said of the Blake Heap trainee. “He’s been working good and doing great right now. He’s been training more regularly than in the past. Normally he runs once, then gets some time off, but right now he’s moving along pretty good.”

As for Espinoza, 46, who has enjoyed success of mythic proportions the last several years despite being in his fourth decade on earth, well past prime time for most athletes, he still seeks to grasp yet another brass ring in the whirlwind game of racing.

“I feel great and I’m looking forward to next year,” said Espinoza, who is represented by agent Brian Beach. “Hopefully, I can find a few more good horses and win big races.

BLANC SEES LIGHT AT END OF THE TUNNEL AS 2017 ENDS

Brice Blanc was born in France, but bent on a cosmopolitan philosophy, adheres to an old Mexican credo: Hope dies last.

It has helped him weather doldrums not uncommon in the Sport of Kings, where only the minority reigns.

Thus it was understandable that almost to a man, Blanc’s friends and cohorts rallied around him in celebration after he guided Midnight Crossing to a front-running half-length victory in Saturday’s Grade III Robert J. Frankel Stakes at a $47.60 win mutuel.

“It meant a lot in more ways than one,” said Blanc during a break from working horses Sunday morning, when it was back to business as usual. “I rode for Bobby for years, so winning a race named for him was more meaningful than most.”

“I had a really rough year,” said Blanc, currently sans agent and representing himself. “I started well, and then business got really, really slow, so ending it like this and winning this race obviously means a lot to me. The last month and a half, things really picked up.

“But I had such a slow and horrible summer, it was hard to keep my head up and stay focused. It’s hard to keep your confidence up without riding the right horses. I mean, 99 percent of winning is due to the horse, and if you don’t ride good stock it’s just very hard to make it.

“It’s even tougher nowadays on this circuit because only a handful of guys have all the horses and most of the good ones, and if you don’t ride for them, it’s hard to win races.”

But thanks to his unflagging resolve, Brice Blanc welcomes 2018 with new found hope.

FINISH LINES: Steph Being Steph, winner of the Golden Gate Debutante on Nov. 24, will make her next start in next Sunday’s Grade II, $200,000 Santa Ynez Stakes for three-year-old fillies at seven furlongs. The Kentucky-bred daughter of Majestic Warrior is named for Golden State Warriors’ prolific three-point superstar Steph Curry. “If she can run like Steph Curry plays,” trainer Brian Koriner said, “we’ll be all right.” The bay filly worked five furlongs Sunday in 1:00.80 under Stewart Elliott, who has the mount in the Santa Ynez, which also is likely to attract Allianna, Artistic Diva, Just a Smidge, Midnight Bisou, War Heroine, Win the War and Yesterday’s News . . . Of 242 recorded workouts Sunday, including 10 on the training track, 20 were by horses from the Doug O’Neill barn . . . Lure Stakes winner He Will, working for Saturday’s Grade II San Gabriel Stakes, went six furlongs for Jerry Hollendorfer in 1:13. Mike Smith rides the six-year-old Cyclotron horse in the 1 1/8-mile turf race . . . Owner/trainer Mick Ruis on pointing Grade I winner Union Strike for her turf debut in the Grade III Megahertz Stakes at a mile on grass Jan. 15: “We’ve always wanted to try her on the turf, and when we decided not to go against those monsters (Unique Bella and Paradise Woods) in the (Grade I) La Brea, this was perfect for her. One mile coming back on turf is a lot easier than going seven furlongs sprinting on the dirt.” . . . Insta Erma, prepping for the Megahertz, worked five furlongs for Richard Baltas Sunday in 1:02.60 . . . There is a Pick Six carryover today of $72,970 . . . Daddy’s Lil Darling, who fulfilled a year-long quest by winning the Grade I American Oaks Saturday, will be given a respite before preparing for her four-year-old campaign. “She’s going to go to Florida (Sunday),” trainer Ken McPeek said after the victory. “She’ll go to Payson Park for the balance of the winter and probably get 45 days of doing little or nothing. Then we’ll ease her back into the program and point her to something, if I had to guess (at) Keeneland in the spring. I really don’t have it nailed down.” . . . Native Treasure, 5-1 morning line chance in today’s second race, has been claimed six times from his last nine races

Richard Spencer still dreaming of 2000 Guineas glory at Newmarket with...

Three longshots to fill your pockets on Monday, July 16