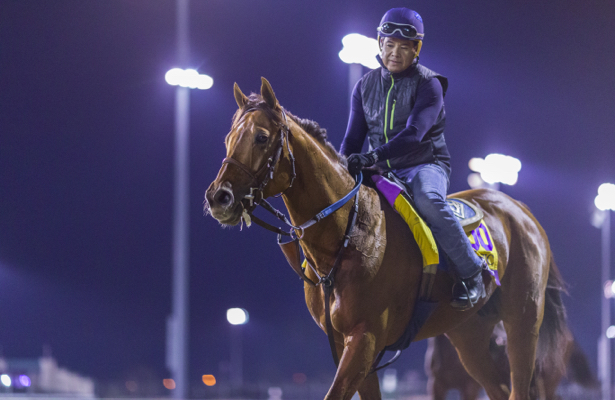 Breeders’ Cup Classic winner and Horse of the Year finalist Accelerate is scheduled to have his final local workout this weekend before shipping to Florida for the Grade 1, $9 million Pegasus World Cup at Gulfstream Park a week from Saturday, Jan. 26.

“The track was open today for the first time in three days,” said John Sadler, who trains Accelerate for owners Kosta and Peter Kosta, “so that’s pretty good. Accelerate will probably work Saturday or Sunday, but I won’t make that call until I see the track in the morning.

“The weather’s supposed to be good, we’re going to race today and they’ll have a chance to refine the track, so more than likely he’ll work Saturday, but it could be Sunday.”

It could have been four, had not St. Joe Bay been claimed from Miller last May 28.

That’s when John Sadler haltered the 7-year-old gelding for principal clients Kosta and Peter Hronis, who have the consistent veteran flying their colors in the Palos Verdes, which offers $200,000 in purse money.

“He’s a nice horse,” Sadler said of the Florida-bred son of A.P. Indy stallion Saint Anddan. “He’s been good for us already (second by a head in the Grade 2 San Carlos, third in the restricted Comma To The Top and winner of an allowance race at Los Alamitos).

“He’ll like this track if it still has a little water in it, and he’s a hard trier, but Roy H is the best around in this division. He’s a tough horse.”

Doug O’Neill, the meet’s leading trainer through 13 racing days, hopes to keep the ball rolling when the 6-year-old daughter of the late Unusual Heat runs in Sunday’s Grade 3 Astra Stakes for older fillies and mares at a mile and a half on turf.

For a stone cold closer, the marathon distance should be ideal for the winner of five races from 29 starts with earnings of $305,780. O’Neill had Lynne’s Legacy for seven races before she was claimed for $40,000 by Steve Knapp last Oct. 28.

“We’ve been dreaming of her running that distance for a long, long, long time,” said O’Neill assistant of 18 years Leandro Mora. “She does her best running the last quarter of a mile, eighth of a mile as a matter of fact sometimes.

“The beauty of the Astra is she likes Santa Anita better than Del Mar, and there are not many opportunities for fillies at a mile and a half, so we’re going to try and take advantage of it.”

Sorting out horse racing’s best for the Eclipse Awards – Orange...

Three runners who catch the eye across Britain and Ireland |...