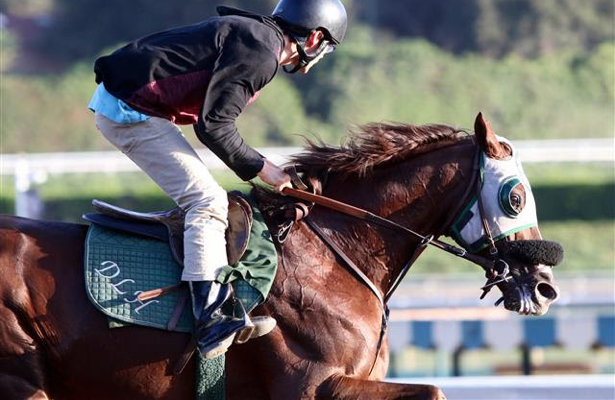 Monday’s Joe Hernandez Stakes is a restricted race offering $75,000 in purse money, but among the 10 horses entered are some that perhaps would elevate it to graded status.

Tops on the list is three-time Grade II stakes winner Om, who missed winning the 2016 Breeders’ Cup Turf Sprint by a nose going about 6 ½ furlongs on Santa Anita’s turf course, the same venue over which the Joe Hernandez will be run.

Despite coming off two route races, including the Breeders’ Cup Mile Nov. 4, Om’s penchant for the course also was embellished by his third-place finish by less than a length in the Grade III Eddie D. Stakes last Sept. 29.

“He always runs good,” said Dan Hendricks, who trains the consistent six-year-old Munnings horse for the Sareen Family Trust. “He seems to at least hit the board, and hopefully we’ll get the win on Monday. I like the draw (post position seven in a field of 13, including three on the also-eligible list).

“There is speed in the race, which should help him. We hope it winds up right.”

The politically incorrectly named One Fast Broad returns to turf in Sunday’s $75,000 Blue Norther Stakes for two-year-old fillies at one mile, after two successive stakes victories on dirt, one at Del Mar going seven furlongs Nov. 3 and the most recent at Los Alamitos going a mile on Dec. 2.

“I think she’s better on turf,” said owner/trainer Mick Ruis, who is readying Triple Crown hopeful Bolt d’Oro for his three-year-old campaign. “In the Surfer Girl here (Oct. 9), turning for home she made an early move and it looked like she was going to win by three.

“But she got in front, hung and finished fourth, but only lost by two lengths.”

A California-bred daughter of Decarchy out of the Mr. Broad Blade dam Awesome Broad, One Fast Broad has three wins from five career starts with one second and the aforementioned fourth in the Surfer Girl.

FINISH LINES: With four wins including two stakes the first two days, Kent Desormeauxis off to a flying start at Santa Anita’s Winter Meet, leading all riders at this early point. The rejuvenated Hall of Fame jockey, who incredulously turns 48 on Feb. 27, is represented once again by Mike Ciani. “We’re happy to be riding for a bunch of barns right now,” his agent said. “We’d like to continue and bring some more in. We want to have a good meet and he’s riding great. I have fun working for him.” . . . Bargain claim Skye Diamonds, fourth in the Breeders’ Cup Filly & Mare Sprint last out, worked four furlongs on the main track Saturday in 52.80 for Bill Spawr, while Grade I winner It Tiz Well went six furlongs in 1:15.40 for Jerry Hollendorfer . . . Yesterday, Breeders’ Cup Sprint winner and favorite to win an Eclipse Award as best male sprinter of 2017 Roy H worked three furlongs at Santa Anita for Peter Miller in 36.60, breezing

It all adds up to Bitsandpieces

South Australian racing’s year in review for 2017, with Ben Scadden...