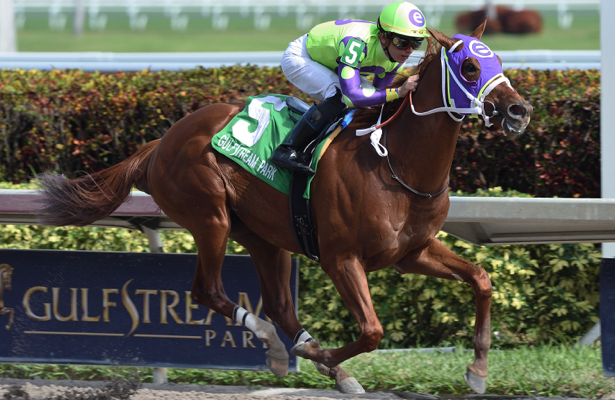 The Limehouse, a six-furlong sprint, was the first of five stakes for 3-year-olds on Saturday’s 11-race program, headlined by the $100,000 Mucho Macho Man.

Seismic Jolt impressively made the jump to stakes company after breaking his maiden by five lengths in a Dec. 7 maiden special weight race for Florida-breds at Gulfstream last time out.

“On paper the race came up tough. He worked excellent last week. He’s been moving forward. If you look at the progression of his races, even off his first race, he’s been moving forward with each race,” said Fawkes of the colt who debuted on turf at Saratoga and finished second on turf at Gulfstream Park West before breaking through with his maiden score on dirt. “As long as he keeps his progression, we’ll be all right.”


His eye-catching triumph Saturday stamped the son of Kantharos as a serious candidate for the $150,000 Swale (G3), a seven-furlong sprint for 3-year-olds on the Feb. 2 program that will be headlined by the $350,000 Fasig-Tipton Holy Bull (G3).

Seismic Jolt ($9.40) broke alertly and vied for the lead while racing four-wide along the backstretch as Running for Riz set a pressured pace while producing fractions of 22.28 and 46.11 seconds for the first half-mile. The Fawkes trainee moved to the lead with only mild encouragement from Gaffalione on the turn entering the stretch and continued on to win comfortably.

“The horse broke real alertly. There was a lot of speed in the race and he likes to run into the bit so I just let him get underneath himself and took a nice hold. When we got to the turn I was four wide and I had a lot of horse, so I just let him out a little bit and he finished the rest,” Gaffalione said. “All the credit goes to Dave and his team, managing this horse. I let him run just a little bit [on the turn] because I was four wide and there was a couple horses tiring so I was trying to get by them and, man, I had a lot of horse.”

Splicethemainbrace rallied from mid-pack under Jose Ortiz to finish second, 2 ¼ lengths ahead of Final Jeopardy, the even-money favorite who trailed the seven-horse field early before making a belated stretch bid.

“He looks like his daddy. He’s the picture of Kantharos,” e Five Racing Thoroughbred’s Bob Edwards said. “He’s the perfect example of what you want. The sky’s the limit.”

Racing Post - December 24, 2017
0
There are five Premier League games on TV this weekend and Bruce Millington is joined by Mark Langdon, Joe Champion and Paddy Power's...

Stewart maps path to Breeders’ Cup for Seeking the Soul

Horse Racing looks for ways to survive in Washington state |...

Horse racing tips for Leopardstown and Limerick on December 28