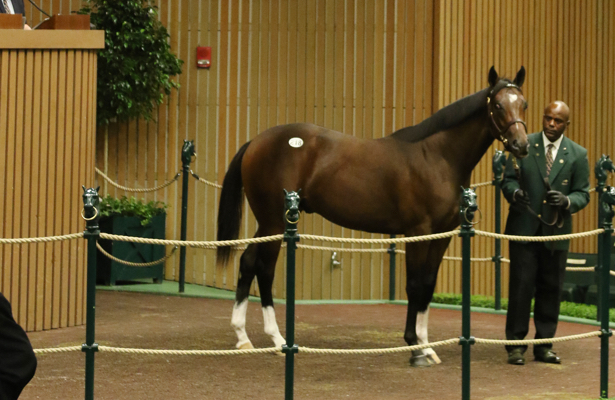 Jimmy Bell of Goldolphin on Monday signed the ticket for Hip 218, a Medaglia d’Oro yearling colt out of Grade 2 winner Moulin de Mougin and consigned by Taylor Made, as a highlight for the opening day of the Keeneland September Yearling Sale.

The second dam, Cambiocorsa, produced multiple stakes winners including Schiaparelli, Alexis Tangier and Bronson. Cambiocorsa is also the granddam of Group 1 Coral-Ecipse winner Roaring Lion, who is out of stakes-placed Vionnet.

“He sold himself. He stepped out every time,” Bell said of Hip 218. “Great walk, great mover, great presence, great behavior. He has all the things you want to see. Sheikh Mohammed, from the first time we saw him, followed him up here and we’re happy to have him.”

Godolphin also stands Medaglia d’Oro at Jonabell Farm, or Darley America. His U.S. fee is $250,000 and he has produced champions Rachel Alexandra and Songbird.

Bell said it’s exciting for the Godolphin team stateside to have the Sheikh visiting.

“Well as you know he’s a very busy man, and everybody – obviously the staff, the farm – we’re so excited for him to come over here,” Bell said. “He had the opportunity to go through the farm and see the yearlings. He just enjoys the horses so much.

“Keeneland, the sales – he loves the sales – and it just makes for a great trip. He’s here with his wife and children, and having just a great stay. We’re just delighted he’s here and it makes it exciting for everybody.”

“It is an honor for us when Sheikh Mohammed is able to clear his schedule and come here,” Keeneland Vice President of Racing and Sales Bob Elliston said. “It has been about 10 years since he was last here. He has been such a huge supporter of Keeneland and the September Sale. To see him on the grounds and participate the way he did today is very rewarding for all of us here at Keeneland.”

no Invitation needed at 3-1