Saturday’s pair of Grade 1 races for 2-year-olds brought the Breeders’ Cup
Juvenile Fillies into clear focus as Sippican Harbor and Bellafina won the Spinaway and Del Mar Debutante, respectively, on opposite coasts. Although they share a common bloodline, these fillies couldn’t be more different. The races also showed the versatility of sire Malibu Moon as both a sire of sires and a
broodmare sire.

First up, the Grade 1 Spinaway Stakes.

Under the guidance of Joel Rosario, Sippican Harbor settled
at the back of the pack early, took a scenic tour of the clubhouse around the
far turn, then powered down the Saratoga stretch to win under
a hand ride. Covered in dirt, the dark bay filly flashed under the wire two lengths
in front of her rivals with her ears up, stopping the timer in 1:23.72 for seven
furlongs and getting her final furlong in a sparkling 12.27.


Sippican Harbor (Orb
– Blossomed, by Deputy Minister) is undefeated in two starts over dirt. Her
only loss came in her debut, a 1 1/16 mile event over turf. She’s earned
$242,650 to date. Along with the shiny Spinaway trophy, Sippican Harbor earned
a spot in the Breeders’ Cup Juvenile Fillies starting gate at Churchill Downs.

The daughter of Orb was bred by Justin
Spaeth, Kalvert Spaeth & Equine Equity Partners. She went through the sales
ring twice, bringing $260,000 at the Fasig-Tipton August yearling sale from her
trainer Gary Contessa.  The
filly failed to meet her $110,000 reserve at the OBS March 2-year-old in training sale. The youngster is
owner Lee Pokoik’s first graded stakes
winner. 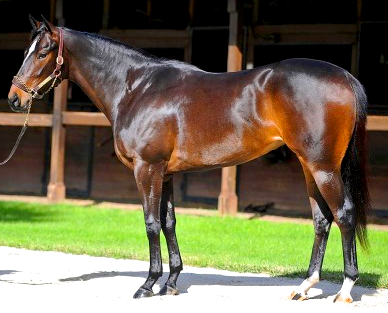 Sippican Harbor is also the first graded stakes winner for
her second crop sire, Orb. The stallion is
best known as our 2013 Kentucky Derby winner. His offspring should improve with
maturity and distance, in the tradition of A.P. Indy and Orb’s sire, Malibu Moon.

The dark bay filly has the pedigree and conformation to
indicate that she’ll enjoy stretching out to 1 1/16 miles in the Breeders’ Cup
Juvenile Fillies. She could mature into a Kentucky Oaks threat next year.

On the other side of the country, Bellafina conquered four
closely matched rivals in the Grade 1 Del Mar
Debutante. Breaking from the far outside, Flavien Prat
and Bellafina stuck to the flank of the pacesetter,
Mother Mother, through sharp early fractions of 21.93 and 44.68. Hitting the
quarter-pole, Pratt urged Bellafina to the lead. Mother Mother and the rest of the fillies offered no challenge, and
the Simon Callaghan-trained filly galloped under the wire 4 1/4 lengths in front. Bellafina’s final
time was 1:25.51 and she got her final furlong in 14:75.


Bellafina (Quality
Road – Akron Moon, by Malibu Moon) placed in her debut, then gave a hint of
things to come when she won the six-furlong Sorrento Stakes (G2) by 4 1/4
lengths last month in front-running style. Bred by JSM Equine, Bellafina wandered through
two auction rings. She failed to meet her $200,000 reserve as a Keeneland September
yearling, but everybody wanted her six months later
when she sold for $800,000 to Kaleem Shah at the Fasig-Tipton March 2-year-old in training sale. 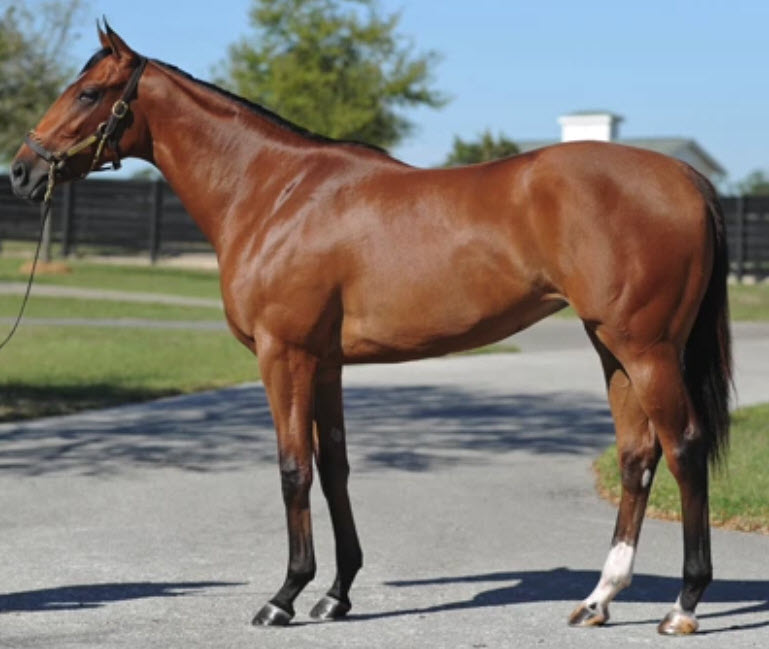 Bellafina is the second foal and second stakes winner out of the stakes-placed Akron Moon
(Malibu Moon – Akronism, by Not For Love). The daughter of Malibu Moon spent much
of her racing career at Woodbine and was
a nose shy of stakes-winning status in a
turf sprint stakes. Akron Moon’s first
foal, Diamond King, a full brother to Bellafina, captured the Heft stakes at Laurel as a juvenile, then returned at three to
win this year’s Federico Tesio Stakes. He also finished second in the Smarty
Jones (G3) and third in the Swale (G3). Akron
Moon also has an unnamed Verrazano yearling.

Bellafina’s distaff line is comprised of winners over dirt
and turf. Akron Moon is a half-sister to the stakes placed turf miler Have at It.
Their dam, Akronisim, is a stakes-placed juvenile,
captured two sprint stakes at 3, and matured into a Grade 3 stakes winner
as a 4-year-old, setting a new stakes
record in the seven-furlong Seaway Stakes (G3).

Bellafina’s pedigree and conformation indicate that she
should handle the 1 1/16 miles of the Breeders’ Cup Juvenile Fillies. As she
matures, she may find the 1 1/8 miles of the Kentucky Oaks at the top of her range.

Although Sippican Harbor and Bellafina carry the bloodlines Malibu
Moon, the two fillies have opposite running styles, and their distance
abilities may differ. Sippican Harbor
carries more stamina in her pedigree, from her Classic-winning sire and damsire
Deputy Minister, who is also the damsire of Horse of the Year and sire Curlin,
Belmont Stakes heroine Rags to Riches, and last year’s Champion 3-year-old filly, Abel Tasman.

Bellafina’s sire Quality Road
was best as a middle-distance runner, between a mile to 1 1/8 miles. He’s sired
a few winners beyond nine furlongs, but they’re turf routers. Malibu Moon may
add some stamina to Bellafina’s distance range, but her conformation and distance limitations of her distaff line suggest
otherwise.

editor - December 30, 2018
0
It's the final day of racing in 2018 and Alan Thompson has two more selections to hopefully finish the year off in style...

Grand National tips – Who should I bet on in the...