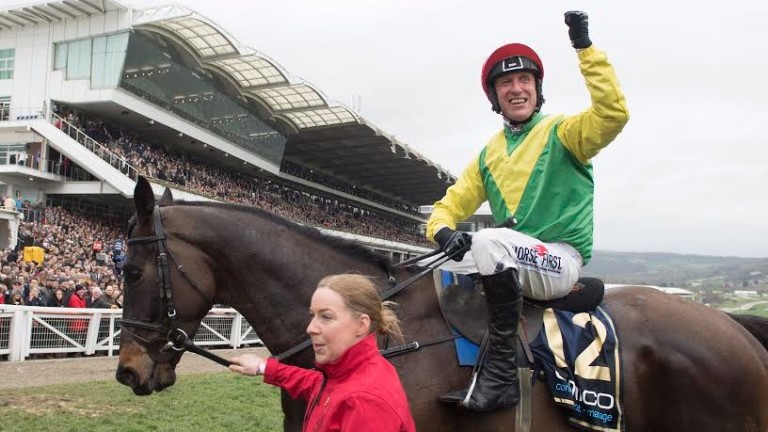 Sizing John: in good order according to Robbie Power

Power said in his BoyleSports blog that he was reunited with Sizing John on the gallops on Thursday and that he was in good condition having not been seen since his appearance at the Leopardstown Christmas meeting last year.

“He was in great form when I rode out on him, he looks fantastic and was moving well,” he said. “He’s come back in great shape and, while he’s just doing steady cantering at the moment, he got a good grip and put my shoulder up to a good test.

“I’d imagine we’d see him back at the track in November because there are plenty of opportunities at the likes of Navan or Down Royal. It won’t be before that. We’ll just take it one day at a time and see how his progress goes.”

Power, who is continuing his recovery from surgery on his shoulder, added: “I’m coming along great, I’ve been out riding for two weeks now and I actually schooled a couple at Jessica Harrington’s yard this morning.

“Everything is feeling good so I hope to start back at Sligo or Killarney next week.”

Steve ‘Bully’ Collier, former travelling head lad to John Dunlop, has died at the age of 63 following a short illness. His funeral will take place on Wednesday, August 29 at 1.40pm at Worthing crematorium, and afterwards at Arundel football club. Everyone is welcome.

Following the abandonment of five races at Ballinrobe last Monday, Horse Racing Ireland has announced an additional evening meeting for Naas on Tuesday, September 4. Entries for the meeting will close by 12 noon on Thursday, August 30.

Breeders’ Cup champ Brant ‘happy to be back’ in racing