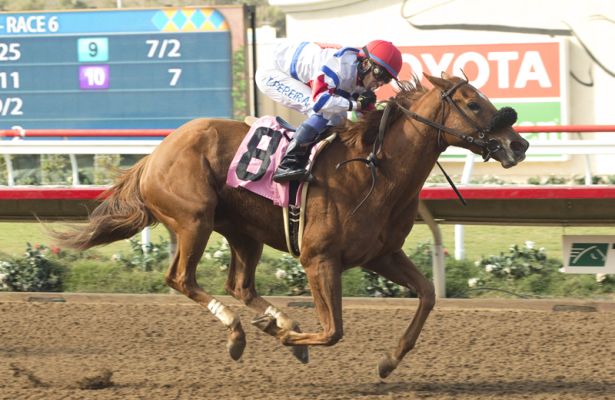 Skye Diamonds, the latest in a career-long series of successful claims by trainer Bill Spawr, will seek to add to her resume when she tries for a second consecutive victory Sunday versus five filly and mare rivals in the Grade III $100,000 Rancho Bernardo Handicap.

Skye Diamonds, claimed for $40,000 August 27, 2016 at Del Mar by Spawr for the ownership combine of Chuck and Lori Allen, Jeff Bloom, Tom Acker and Jon Lindo, will pack highweight of 122 pounds, most of which will be regular pilot Tiago Pereira.

Since being claimed two summers ago, Skye Diamonds, a chestnut daughter of First Dude, has won six of 13 starts and almost $500,000 for her new owners, including stakes wins in the aforementioned Rancho Bernardo and the Great Lady M Stakes at Los Alamitos a year ago. She capped her 2017 campaign with a highly creditable fourth-place finish in the Breeders’ Cup Filly & Mare Sprint.

Most recently, she was second to the formidable Marley’s Freedom in the Great Lady M.

Three-year-old Moonshine Memories, trained by Simon Callaghan, has won three of four starts at Del Mar, including the 2017 Grade I Del Mar Debutante. She enters the Rancho Bernardo after an allowance triumph July 19.

Anonymity, conditioned by Richard Mandella, has won three of four starts and will be stepping into stakes company for the first time after an eight and one-quarter length romp July 29 going seven furlongs.

Post time for the first race Sunday will be 2 p.m.

editor - November 6, 2018
0
When grim news broke of another horse dying at this year’s Melbourne Cup festivities, Twitter was quick to weigh in on the divisive...

Golden Slipper favourite Sunlight could be the first horse owned by...

Three horses worth keeping an eye on at Chelmsford tonight |...