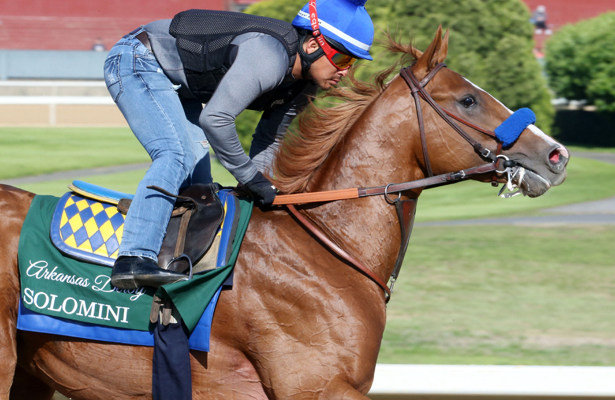 Solomini, who was entered over the weekend in an allowance optional claiming race at Churchill Downs, scratched from that spot and will instead go in stakes competition next out.

Justin Zayat, racing manager for owner Zayat Stables, announced Monday that the Curlin colt is headed back to the West Coast for a start in the Grade 3, $100,000 Affirmed Stakes going 1 1/16 miles.

Nominations aren’t yet out for Sunday’s race at Santa Anita Park, but stable notes from the track indicated his competition will include stakes placed Jerry Hollendorfer-trainee Afleet Ascent and maiden winner Draft Pick from the Peter Eurton barn.

Solomini will run @santaanitapark this weekend in the Affirmed Stakes G3! Doing well, bounced out of the derby in good shape. Hoping he takes the next step forward this summer! I know he has it in him. @jazz3162


Solomini, 10th in the Kentucky Derby, remained at Churchill Downs since then and has worked three times, most recently breezing a half mile last week in 48 seconds flat. He was initially considered for the Belmont Stakes, but given class relief, he could return to the winner’s circle for the first time since his debut victory Sept. 2.

Since making his first start, Solomini has appeared only in Grade 1 and Grade 2 races, crossing the wire first in the Los Alamitos Futurity (G1) before disqualified from the top spot for bumping in deep stretch.

editor - December 1, 2018
0
BARRYS JACK (2.00 Carlisle) looks the best bet on a quiet Sunday. He ran an excellent race on his comeback here last time when...

Field Of Fifteen Set For Sunday’s Japan Cup At Tokyo –...