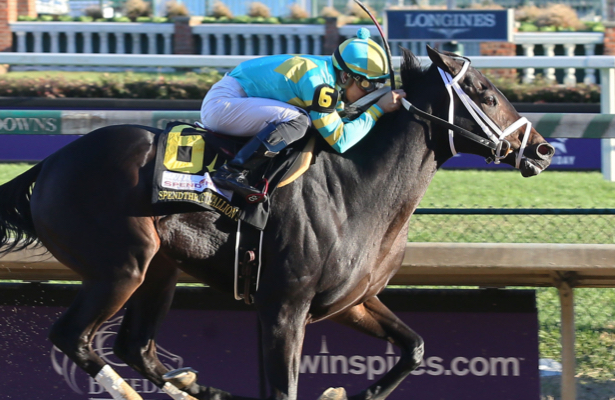 Remington Park’s Springboard Mile marks an official stop on the road to the 2019 Kentucky Derby, and this year’s renewal of the listed stakes attracted a field of 11, including invaders Epic Dreamer and Dunph, along with a quintet of runners trained by Hall of Famer Steve Asmussen.

In addition to a $400,000 purse, the Springboard Mile offers Kentucky Derby qualifying points to the Top 4 finishers on a 10-4-2-1 scale. Here is a look at the field with the official morning line.

Epic Dreamer [ML 8-5 – Orb – K. Breen/J. Castellano – 2: 1-1-0 – $56,250] This son of Orb brings New York flavor to the Springboard Mile. His debut at Belmont Park was in a maiden special weight flight where he finished second between two talented 2-year-olds. Next-out Nashua (G3) winner Vekoma earned a 97 Beyer Speed Figure, and Mihos broke his maiden next out as well. As expected, Epic Dreamer came back from that key race and won his next start in flashy, front-running fashion going a mile and a sixteenth. The top choice.

Kaziranga [ML 15-1 – Candy Ride – S. Asmussen/I. Diego – 4: 1-1-0 – $27,367] This Calumet Farm colt is the first of five runners from Steve Asmussen. He broke his maiden in his third start and followed that with a second-place finish in an allowance race going a mile at Remington. He debuted at Ellis Park, meaning he likely was not among the barn’s top juvenile prospects. Toss.

Marquee Prince [ML 10-1 – Cairo Prince – B. Cox/F. Geroux – 4: 2-0-0 – $56,623] All four of his starts have come at Sunday’s mile distance. He has a muddy maiden win at Indiana Grand and an allowance victory on the Churchill Downs turf course. Then he ran into next-out Los Alamitos Futurity (G1) winner Improbable in the Street Sense Stakes when that track was dry, but the competition much tougher. Use underneath.

Six Shooter [ML 8-1 – Trappe Shot – P. Holthus/A. Canchari – 5: 2-0-3 – $78,850] This Kentucky/Indiana based runner has never run off the board in five career starts. He debuted at Churchill Downs in September, broke his maiden at Indiana Grand, and three weeks ago won an allowance at Churchill taken off the grass. He makes his stakes debut here. Toss.

Long Range Toddy [ML 12-1 – Take Charge Indy – S. Asmussen/R. Eramia – 3: 2-1-0 – $81,125] This son of Take Charge Indy may be the best of the Asmussen runners based on his convincing local victory on the front end over stablemate Tobacco Road in the Nov. 2 Clever Trevor Stakes. He has two wins in three starts that have all come at Remington Park. Use underneath.

Tone Broke [ML 15-1 – Broken Vow – S. Asmussen/D. Cabrera – 4: 2-0-0 – $42,428] This Asmussen runner has a home track advantage with two stalking victories coming in his last two races, both at a mile. He was soundly beaten by Marquee Prince in the first race of his career but that came on a wet track. Use underneath

Dobbins G [ML 30-1 – Jimmy Creed – M. Lozano/L. Quinonez – 6: 1-0-3 – $49,224] This Oklahoma-bred is making his first start outside of state-bred company in the Springboard Mile. He broke his maiden in his fifth career start and then ran third in a stakes race going a mile. He knows the surface quite well, but this represents an enormous step up in class. Pretender.

Bankit [ML 3-1 – Central Banker – S. Asmussen/R. Santana Jr. – 5: 2-2-0 – $249,625] This Asmussen runner has raced exclusively at Saratoga and Belmont Park. The New York-bred made his last four starts against state-breds, including a win going a mile in the Sleepy Hollow at Belmont Park in October. He has not raced since then but also has not missed a workout, with his most-recent breeze at Remington. Live longshot.

Tobacco Road [ML 15-1 – Quality Road – S. Asmussen/R. Vasquez – 6: 2-0-1 – $90,130] Lots of experience in the PPs of this Asmussen trainee. He registered two wins in a row at Ellis Park in the summer before hitting the Derby trail for Churchill’s Iroquois (G3) and Keeneland’s Breeders’ Futurity (G1). The winning streak ended there. Tobacco Road’s fourth-place effort in the Iroquois was solid, and the son of Quality Road is a confirmed off-the-pace runner. Live longshot.

Dunph [ML 10-1 – Temple City – M. Maker/R. Gutierrez – 3: 2-0-0 – $107,540] His maiden victory at Penn National came by open lengths, spurring a private purchase and move to Mike Maker, who saddled the colt for a 7 3/4-length score in the restricted Spendthrift Juvenile Stallion Stakes going seven furlongs at Churchill. Dunph didn’t hang with the big boys in the Kentucky Jockey Club Stakes (G2), but perhaps it was the sloppy track and not the competition he didn’t like. His wins came while sitting just off the early pace. Serious contender.

D Toz [ML 20-1 – Chitoz – D. Pish/L. Luzzi – 3: 2-1-0 – $78,269] This gelding is the better of the two Oklahoma-breds in the field. He raced only in state-bred races and won his last two starts with a maiden score in October and then a stakes victory going a mile. All three starts were at Remington. Pretender.

Summary: The Springboard Mile looks to have a fair pace scenario with a balance of 2-year-olds that like to run on or near the lead and those that prefer to make a late run. Also, there is an interesting mix of horses with experience at Remington Park and shippers making their first start at the Oklahoma track.

Epic Dreamer leads the out-of-towners, and although he has only a maiden victory to his credit, the fields he faced in his two starts were top-notch. Dunph won his first two starts, which included a restricted stakes race at Churchill Downs. The New York-bred Bankit has gotten a short freshening and could be dangerous off his success in New York.

Of the local talent, you must assume that at least one of the Asmussen runners will be a factor. Long Range Toddy has three starts on the track, including a stakes win and a victory at today’s distance.

Back To Business For Purton