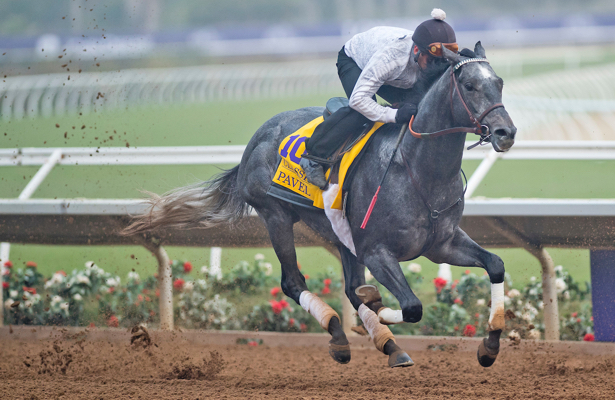 There is seemingly just one void to fill in the prospective field for the Pegasus World Cup on dirt, that being the 12th spot that could have gone to McKinzie. Over the weekend, connections labeled the recent Malibu Stakes (G1) winner doubtful to run.

The first edition of the Grade 1, $7 million Pegasus World Cup Turf, however, remains more of a work in progress. These horses are so far considered probable to run Jan. 26 at Gulfstream Park: Aerolithe, Channel Maker, Delta Prince, Magic Wand and Yoshida.

There also appear to be a number of moving parts.

• Yes, that’s Coolmore’s Magic Wand, not Magical, the filly who finished second to Enable in the Breeders’ Cup Turf. It appears those names were mixed up along the way. Magic Wand is a 4-year-old filly by Galileo who ran fourth in the Breeders’ Cup Filly & Mare Turf last out.• Next Shares also seems certain to run off his recent victory in Santa Anita’s San Gabriel (G2). “It looks like he is going to go,” trainer Richard Baltas said last week.• XBTV reported Sunday following Pavel‘s six-furlong breeze Sunday in 1:13.40 that trainer Doug O’Neill has the 5-year-old son of Creative Cause under consideration for the Pegasus turf. Pavel most recently ran 10th in the Breeders’ Cup Classic, then as last when making the trip to Japan in early December.• Recent allowance winners Bricks and Mortar and Dubby Dubbie appear on the Pegasus World Cup Turf nominations list along with Robert J. Frankel (G3) winner Fahan Mura; Todd Pletcher-trained Hi Happy; Holy Helena and Unbridled Juan, as with Delta Prince, a Stronach Stables runner; Hunting Horn; Qurbaan, and Zulu Alpha.

What’s with the, well, less-than-stellar field? Remember this race wasn’t even announced until September. Likely, it will take a year to make it a fit for overseas connections and their top horses who were already nearing the end of their planned campaigns last fall.

The back-to-back Breeders’ Cup Sprint winner, Roy H, will on Saturday kick off his year in defense of another stakes, Santa Anita’s Grade 2, $200,000 Palos Verdes.

They aren’t exactly lining up in droves to face the champ in the six-furlong feature. As of Sunday, Santa Anita’s stakes coordinator had only St. Joe Bay, the John Sadler trainee, listed as probable. Additionally, trainer Jerry Hollendorfer plans to run both graded winner Kanthaka and Awesome Anywhere, an allowance winner who ran third in his first stakes start in November at Golden Gate Fields.

Entries will be taken Wednesday.

Racing fans owe a thank you to Fair Grounds, whose policy of taking entries early gives a week to evaluate the overflow field for the Grade 3, $200,000 Lecomte Stakes, a 2019 Kentucky Derby prep run Saturday at 1 mile and 70 yards.

The Lecomte goes as Race 12 of 14 on a stakes-laden card. Here’s a look at the other fields:

Thewayiam Racks Up Third In A Row With Herecomesthebride Victory –...