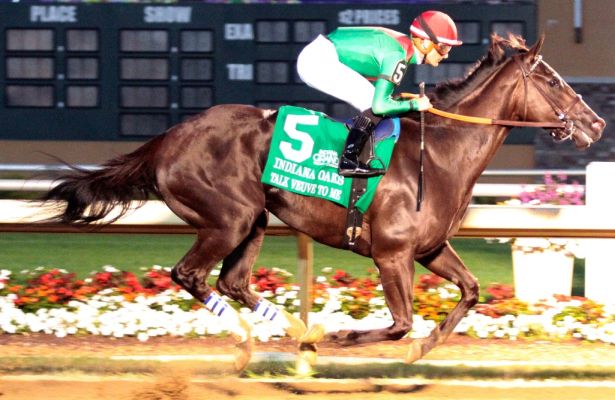 Talk
Veuve to Me, most recently fourth in the Alabama (G1) at Saratoga, completed her major preparations for next Sunday’s 1 1/8-mile $500,000 Juddmonte Spinster (Grade 1) by working a half-mile in company in :48.20 over a fast track Sunday morning.

“I would give her two thumbs up (for the work),” said trainer Rodolphe Brisset, who was aboard Tale Veuve to Me. “She did it easy on the bridle. She had her
major work last week when she went five-eighths in (:59.60) and out (6 furlongs) in 1:12.”

Sunday’s work was the fourth at Keeneland since the Alabama for Talk Veuve to Me. Brisset owns the filly in partnership with Team Valor International and
Stephen McKay.

“She has done very well since the Alabama and the six weeks timing between races is very good,” Brisset said of the filly, who won the Indiana Oaks (G3) prior
to her Alabama run.

“We did not get the setup we wanted in the Alabama,” Brisset said of the 1¼-mile race. “I still think she is a two-turn filly and now she is back on her own
track.”

The Juddmonte Spinster will be Talk Veuve to Me’s first start against older horses.

“That is not a concern,” Brisset said. “You have to face them sometime.”

Other works of note included Dixiana Bourbon (G3) probables
Blockbuster, who worked a half-mile in :48 for trainer Mark Casse, and
Tracksmith, who covered five furlongs in 1:01.80 for trainer Joe Sharp.

Historical Horse Racing to be a Focus At Winter Meeting of...

Irish War Cry retired, to stand at stud in Maryland

Army Mule back with Pletcher; ‘Breeders’ Cup in mind’