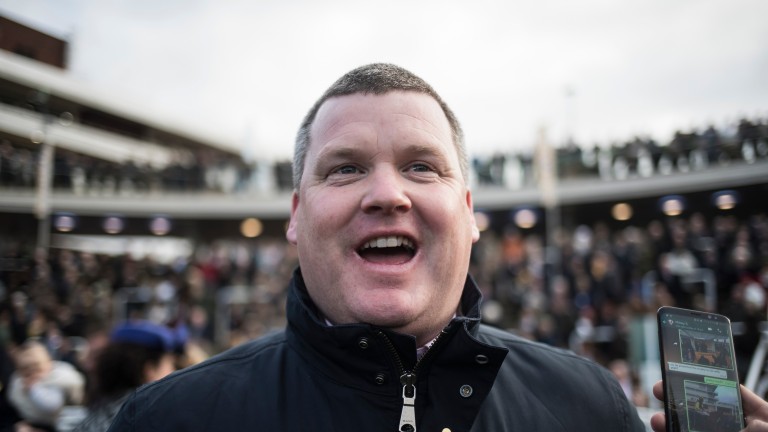 Performance of the week

Gordon Elliott, top operator at the Cheltenham Festival and favourite for his first Irish jumps trainers’ title, earned another honour for reaching the 200-winner mark at Cork on Monday. The milestone came courtesy of Portnablagh in the bumper and arrived an hour or so after General Principle had provided him with a maiden triumph in the BoyleSports Irish Grand National.

Disappointment of the week

The progressive Waiting Patiently, who contributed to one of the races of the season when downing Cue Card in the Betfair Ascot Chase, was set to be among the stars of Aintree’s Grand National meeting but suffered a setback and will not run. A possible for the Betway Bowl or JLT Melling Chase on Merseyside, where track and ground promised to suit, the Ruth Jefferson-trained ace has not suffered a career-ending injury, but whether he makes a return next season is unclear.

In consultation with the BHA Inspectorate Saturdays meeting @stratfordraces has regrettably been ABANDONED. The track is waterlogged with no chance of recovery in time #anotheronedown pic.twitter.com/zJbaK5hnlG

Ride of the week

JJ Slevin enjoyed the biggest success of his career when striking on General Principle in the Irish National and, along with the horse and Gordon Elliott, deserves his slice of the credit. The 20-1 shot was not fluent at the 11th and was sixth five fences from home. As Bellshill and then his Willie Mullins-trained stablemate Isleofhopendreams threatened to strike, Slevin conjured a winning run from his willing partner to seal a last-gasp victory.

Dilemma of the week

Churchill Downs or Newmarket? Not even Ryan Moore can be in two places at once, so come May 5 he will have to decide between riding an Aidan O’Brien hotpot in the Qipco 2,000 Guineas – most likely Saxon Warrior – or heading to the States for stablemate Mendelssohn in the Kentucky Derby, a race he is longing to win. Most rate it a no-brainer and think it’s certain Moore will be readying his passport.

Quote of the week

“You cannot go into a race and not have confidence in your horse. What’s the point of being a jockey if you don’t believe you can win?”

Enjoy the daily Racing Post newspaper in full with our digital newspaper. Available to download on any device from 9pm every evening, giving you tomorrow’s paper the night before – exclusive to Members’ Club Ultimate. Join here