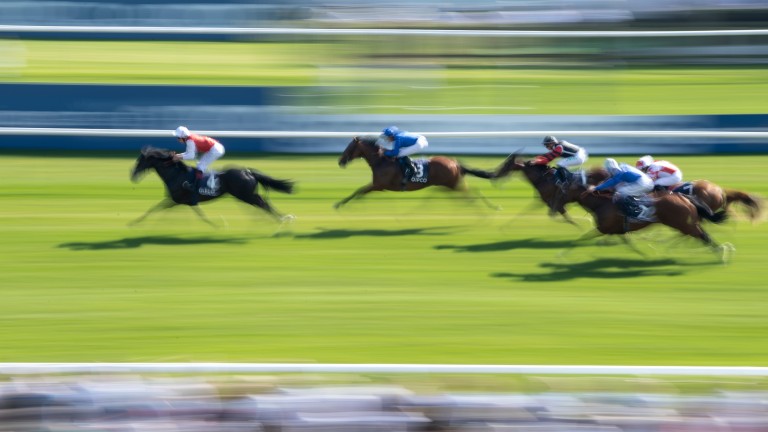 Another angel of the north?

Havana Grey won this 12 months ago for Karl Burke and his North Yorkshire counterparts Tim Easterby and Richard Fahey send southern raiders with optimism the trip will not be wasted.

Easterby, represented by emphatic first-time-out Thirsk winner Vintage Brut, said: “He didn’t surprise me at all on his debut as we thought he was a very nice horse and he looked like that. He works well and I haven’t been in a rush to run him since he ran because he won well.

“He’s a horse who will get better as he matures and gets older, while the ground should be all right – I can’t see it being a problem.”

Watch a replay of Vintage Brut’s debut win at Thirsk

Sabre, for Fahey, was successful on his debut at Newcastle.

The trainer said: “We’ve been very happy with him. It’s a warm race, but I think he’s entitled to be there.

“The draw in three is good and he’s a horse with a lot of speed. I’ll tell you about the ground after the race, but because he’s a Mayson everyone will say they want soft ground but I’ve had loads of his progeny win on fast ground.

“Mayson won a July Cup on soft ground and everyone says they want it soft, but Dance Diva has won on fast for us, like many others.”

The Richard Hannon yard has usually proved worth following in this race with six wins in the last 11 years and it seems the stable means business once again, booking Ryan Moore for Wedding Date.

She was a smooth winner at Chester’s May meeting and Hannon enjoyed juvenile winners at Newbury on Friday and Windsor on Monday.

After Blown By Wind had won at Ascot this month trainer Mark Johnston said the Coventry Stakes would be “top of the list” of targets, but the Invincible Spirit colt takes another step on the road to the royal meeting under James Doyle.

He won on heavy ground at Windsor on his debut and it was good to firm at Ascot, so any overnight rain should not pose a problem.

Jack Channon, assistant to Mick Channon, trainer of Kinks
He was a non-runner at Chester the other day, but he’s in great nick and we’re very happy with how his training has gone this week, so we go there with a good chance. We’re hopeful of a good run.

Clive Cox, trainer of Konchek
He’s in great form and I was really pleased with his debut win at Newmarket. He’s trained well since and hopefully this will be suitable for his next step. It’s a hot race. The draw isn’t particularly kind, but he’ll be fine. We’re still learning about him but we’re very happy with him.

Stan Moore, trainer of Nakakande
Nobody seems to rate her, but she won her maiden in France easily and it was quite a hot race when she was third at Longchamp last time. She won’t mind the ground either way as she’s run on soft and fast. Five furlongs is probably on the sharp side, but it’s a stiff five at Sandown. I think she’ll be a good price for a lively outsider with a chance of running a big race. I think she’s quite a nice filly.

The rest of Sandown’s card

editor - January 14, 2019
0
Nick Gifford could run Didtheyleaveuoutto in the Betfair Hurdle at Newbury if conditions were in...

Three to note for tonight’s racing at Wolverhampton | Horse Racing...