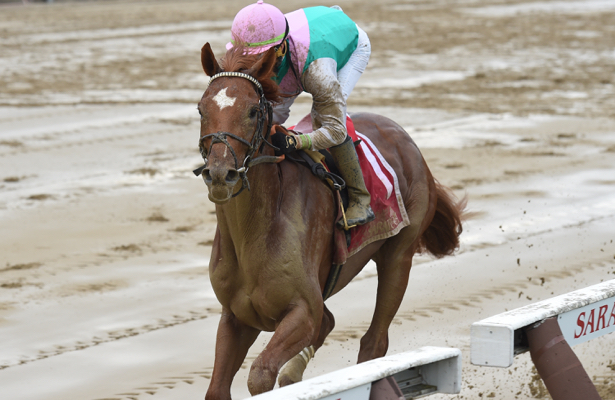 In the absence of Justify, it appears no horse has been scared off from giving the Grade 1, $1.25 million Travers Stakes a try. Indeed it would have been nice to see the unbeaten Triple Crown winner at Saratoga, and in the starting gate for the Mid-Summer Derby, but what we might see instead is a more interesting race for fans and bettors alike.

This year’s Travers promises to feature a wide-open and big field, and an eclectic one at that. For starters, Good Magic and Hofburg did what they were supposed to do this past weekend, easily taking the Haskell Invitational and Curlin Stakes, respectively, as heavy favorites.

Including most of America’s top remaining 3-year-olds, the signature race of the Spa should have a plethora of potential winners, but Good Magic has earned his right for top billing. The Kentucky Derby runner-up, and winner of the Breeders’ Cup Juvenile, Blue Grass, and Haskell, has only finished out of the money once in his eight-race career, and that came in a one-length defeat in the Preakness after dueling with Justify early.

Certainly last year’s juvenile champ has done little wrong in his career. In fact, had there not been a Justify, you could make the case that he would have made the trip to the Belmont Stakes in search of his own shot at immortality. Still, there are questions.

While an easy win for Good Magic, yesterday’s Haskell was against less than stellar competition, and the final time of 1:50.01 was not awe inspiring. Out of Curlin and a very nice Hard Spun mare, I also thought that distance would not be an issue for Good Magic, but in watching him finish off all five of his races this year, I’m left to wonder if 10 furlongs isn’t a little farther than his ideal distance. Having said that, the Haskell should set him up perfectly for the Travers, and he did beat everyone but Justify in the Kentucky Derby at 1 1/4 miles.

I have no such distance concerns for several other Travers-bound runners.

Chief among them is Hofburg, who finally found a little class relief in Friday’s Curlin Stakes. He also found a sloppy, speed favoring racing surface. No matter, as the class of the field, the handsome son of Tapit took over the proceedings when prompted, and cruised home much the best. Seemingly right at home over the Saratoga main track, he’s promised big things ever since his second-place finish in the Florida Derby in his third career start, and now looks primed to deliver for Hall of Fame trainer Bill Mott. He’s yet to win a graded stakes, so the Travers will be a big opportunity for the still lightly raced colt.

While Good Magic and Hofburg look to be deserving favorites for the Travers, it is after them where things really get interesting. Let’s start with the filly.

Wonder Gadot has always been good, but the daughter of Medaglia d’Oro kicked things up a notch in her last two starts. Granted, both wins came in races restricted to Canadian-breds, but it was impossible not to come away impressed with the way she dominated her competition in the first two legs of Canada’s Triple Crown. Proven for class when a good second behind Monomoy Girl in the Kentucky Oaks, the Mark Casse conditioned miss not only added blinkers in the last two, but she found more distance as well. The Travers seems to be worth the shot for a filly going really good right now.

The same could likely be said for Catholic Boy. In fact, the son of More Than Ready has much in common with Wonder Gadot. The past performances will show you that they are both coming off a pair of impressive wins, but they also share commonalities from early on. Both started off their careers on turf, winning their debuts before quickly graduating to graded stakes racing on the grass. Both Catholic Boy and Wonder Gadot finished out of the money in their respective Breeders’ Cup races in performances probably better than it looks on paper.

Finally, they both had their coming out party on the dirt on the same fall afternoon at Aqueduct. In big wins going nine furlongs in the Remsen and Demoiselle, respectively, Catholic Boy and Wonder Gadot both proved that they could run on the main track, and that distance would likely never be a problem.

As far as Catholic Boy goes, he has certainly demonstrated a strong desire to win, having defeated the very talented Analyze It in consecutive game performances. He will also come into the Travers, provided they do choose to go after the big one at Saratoga, off a 10-furlong win. His dirt form is certainly good enough to take a shot with him.

Then you have Gronkowski. Named after the terrific New England Patriots tight end, he made a long-anticipated U.S. debut worth the wait by coming up the rail and finishing a strong second behind Justify in the Belmont Stakes. After connections pointed him for the Kentucky Derby, we finally got to see why they wanted to run him on dirt for so long. If the Belmont Stakes is the guide, you would have to give the son of Lonhro a big shot in the Travers. The second start in America can often be tougher than the first, but having trainer Chad Brown in his corner is a plus for the colt who has finished first or second in six straight races.

Not quite as impressive as Good Magic or Hofburg this past weekend were the Jim Dandy runners. Still, discounting the winner, Tenfold, or the third-place finisher, Vino Rosso would be a mistake. Like Good Magic, they are both sons of Curlin who have flashed enough ability to believe that they will be in with a chance in the Travers.

Tenfold finished behind Gronkowski, Hofburg, and Vino Rosso when fifth in the Belmont, but before that the lightly raced colt finished an excellent third in the Preakness for trainer Steve Asmussen. The Jim Dandy was still only his sixth lifetime race, and despite running erratically down the lane, he had enough to get the job done for his first graded stakes win. With that experience over the Saratoga main track under his belt, an improved performance in the Travers is very possible.

Making up serious ground late in the Jim Dandy was Vino Rosso, and had the race been the 10 furlongs of the Travers, he likely would have come out on top. Unfortunately, though, for the impressive winner of the Wood Memorial back in April, it was too little to late after lagging far behind a moderate pace for much of the race. He seems to be a horse with plenty of talent, but one who has trouble running a focused, complete race. If trainer Todd Pletcher can get the best out of him in the Travers, he could surprise just when bettors jump off the ship.

Then there’s Bravazo. He honestly was no match for Good Magic yesterday at Monmouth Park, but after looking well beaten on the far turn, he kept running down the stretch to be much the best of the rest. As the only horse who tested Justify in all three legs of the Triple Crown, and an excellent runner-up in the Preakness, you might think that the son of Awesome Again would be getting weary, but he appears to be a hickory type that just keeps going. He’s likely a longshot Travers day, but much like another D. Wayne Lukas charge of a few years ago, he has enough in his past performances to believe he could be capable of pulling a Will Take Charge in this year’s edition.

Well, that’s eight interesting horses for the Travers, and there are sure to be more. It will be a big field, and without Justify, it looks to be a competitive one. Mark your calendars for Saturday, August 25, folks.

This Mid-Summer Derby should be a fun one.

Why own a racehorse? First Kiss gives me many reasons