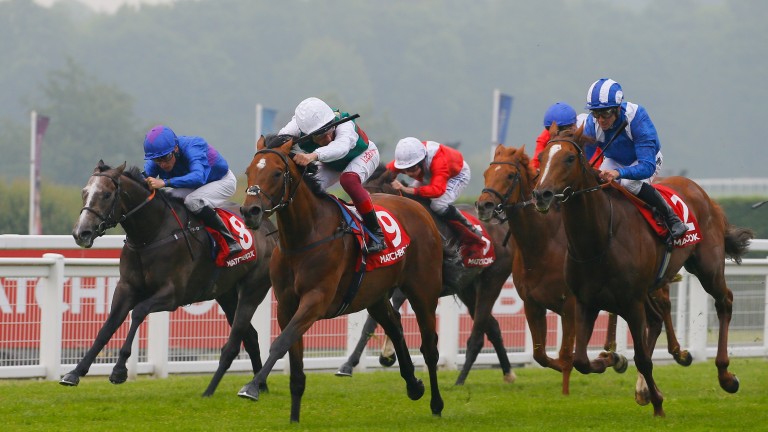 Vintager (far left) finishing third to Without Parole at Sandown

David Menuisier, who could be represented in the Group 1 Juddmonte International Stakes at York this month with Thundering Blue, has been dealt a blow as his promising three-year-old Vintager has left his yard following his sale to Godolphin.

Menuisier has already enjoyed his best campaign in terms of prize-money, largely thanks to Thundering Blue, who struck in a hot handicap at York’s Dante meeting before returning to the track to land last month’s Sky Bet York Stakes, providing the trainer with his biggest winner.

That has led to talk of a crack at the International, but connections will contemplate supplementing the five-year-old only if conditions are suitable and there is sufficient ease in the ground.

While Menuisier has that to ponder, he will have to do without Vintager.

A son of Mastercraftsman who ran in the colours of Gail Brown Racing (VIII), he won on his debut at 33-1 at Newmarket last year and finished third behind subsequent St James’s Palace Stakes winner Without Parole in a Listed race at Sandown in May.

A fourth in the Hampton Court Stakes at Royal Ascot followed before he won at Newmarket three weeks ago.

“It’s always a difficult decision to sell a nice horse, but people want progressive horses and I think he is progressive,” said Brown, who manages the 12-strong partnership that used to own Vintager.

“Our partnerships are set up to sell at the end of their three-year-old career anyway, so it’s not as if we’re selling a year early, it’s only a couple of months early.

“While it would have been lovely to see him go on for the rest of the year, it seemed a sensible move.”

Brown, who offered the Menuisier-trained juvenile Migration as a horse to look forward to, added: “Vintager was a lovely, not over-big, genuine, very sound colt, who had a terrier-like attitude; he really gave his best.

“I bought him in conjunction with Richard Frisby and I just loved him. David Simcock was the underbidder and he loved him too. Very kindly, David was the first to congratulate me when the horse won first time out at Newmarket.

“He’s gone from strength to strength and he’d run in some tough races, so it wasn’t a surprise to see him come good at Newmarket.”

Reflecting on their shock 33-1 debut success, Brown said: “Members tend to put a tiny amount on through loyalty and nothing else, but he was one of those lovely horses who was bone idle at home and ate and slept and didn’t do much else.

“He’d done one nice piece of work up the grass before he went to Newmarket, which made us think this is looking more encouraging, but before that he’d been fast asleep.”