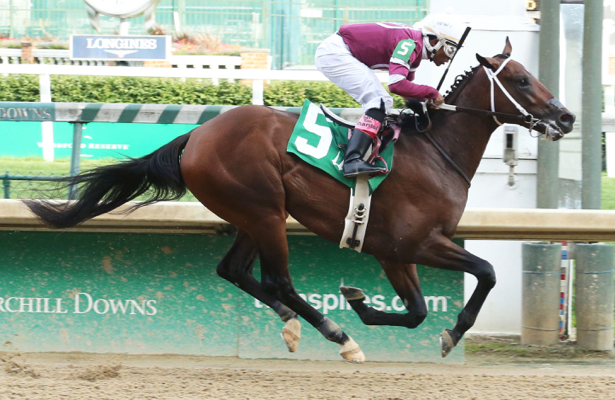 The 1 1/16-mile Iroquois, one of four stakes events on the first Saturday of the 11-day September Meet, is the first scoring race on the 2018-19 “Road to the Kentucky Derby” – the series of 35 races that will ultimately determine the field for the 145tth running of the Kentucky Derby. Points awarded to the Top 4 Iroquois finishers will be 10-4-2-1 as part of the 19-race “Prep Season” that showcases foundation-building races in advance of the “Kentucky Derby Championship Series,” which begins in late February.
The Iroquois also is part of the Breeders’ Cup “Win & You’re In” program with the winner receiving an automatic berth into the $2 million Breeders’ Cup Juvenile on Nov. 2 at Churchill Downs.
Headlining Saturday’s Iroquois field is Winchell Thoroughbreds’ Tight Ten (2-1-1-0—$70,600). The 2-year-old Tapit colt impressively broke his maiden by 4 ¼ lengths under Ricardo Santana Jr. on June 28 at Churchill Downs. The homebred spent July and August at Saratoga Race Course and finished a game runner-up behind Call Paul in the Aug. 12 Saratoga Special.

Joining Tight Ten in the Iroquois starting gate is stablemate Tobacco Road (3-2-0-0—$70,905). Owned by L and N Racing, the Quality Road colt rallied from off the pace as the 9-5 post time favorite under leading rider Corey Lanerie to narrowly win the $75,000 Ellis Park Juvenile on Aug. 19 over Whiskey Echo and Manny Wah.

“I think we could win this time,” trainer Wayne Catalano said. “It’s the perfect spot. We had a really fast work last week and he looked great. We really ran well down at Ellis. This is the right spot to get points for the Derby and a spot for the Breeders’ Cup Juvenile right in our back yard. We can walk right out of our stall for the race.”

The four stakes, which are the last four races on the card, comprise an all-stakes late Pick 4 and are part of the late Pick 5 and Single 6 Jackpot sequence.

Can Bandages Cause Tendon Damage In Racehorses? – Horse Racing News

Queen greeted by an array of colourful hats on Ascot visit