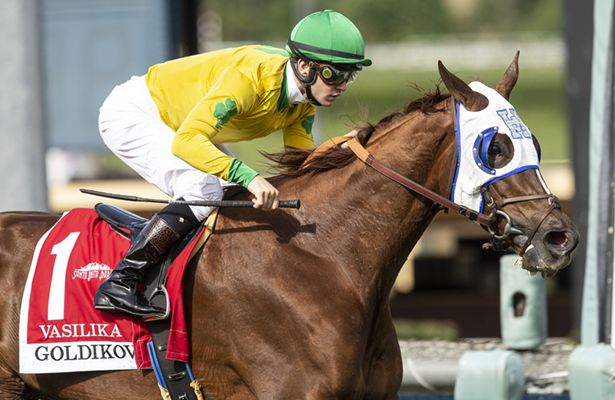 Claimed nine starts back for $40,000 on Feb. 11, trainer Jerry Hollendorfer’s Vasilika won for the eighth consecutive time today at Santa Anita, as she rallied to take the Grade II, $200,000 Goldikova Stakes by 1 ½ lengths as the even money favorite.  Ridden by Flavien Prat, the 4-year-old Kentucky-bred daughter of Skipshot got a flat mile on grass in 1:33.49.

Breaking from post position one in a field of eight fillies and mares three and up, Vasilika was taken in-hand out of the gate and was a joint seventh heading into the Club House turn.  Prat worked his way through traffic around the far turn and she rallied two from the rail while fourth turning for home en route to her third consecutive graded stakes victory.

“I was worried about her getting trapped on the rail, but fortunately, Flavien had her in a good spot the whole way,” said Hollendorfer.  “He saved ground around the first turn, then when she was ready to go, he got through and rode a beautiful race, maybe his best race yet on her.”

Owned by All Schlaich Stables, LLC, Hollendorfer, Gatto Racing, LLC and George Todaro, Vasilika, in her ninth start for her new connections, picked up $120,000 for the win, increasing her earnings to $740,595.  With nine wins from 10 starts this year, she is now 27-13-4-3 overall.

“She’s so professional, she probably knows where the wire is better than me,” said Prat.  “I was a little concerned about the rail, but we let everyone go and she was very comfortable just outside the two-horse (Madame Stripes) going into the first turn and I was feeling good.  As you saw, she’s got a really good turn of foot.”

Sent from the far outside as expected by Edwin Maldonado, Fahan Mura, who took the restricted Swingtime Stakes going a mile on turf here Oct. 7, was gallant in defeat, finishing 1 ¼ lengths in front of Madame Stripes.

Argentine-bred Madame Stripes, who was off at 28-1, rallied to just overhaul well fancied Lull by a nose for third money and paid $8.60 to show with Rafael Bejarano up.