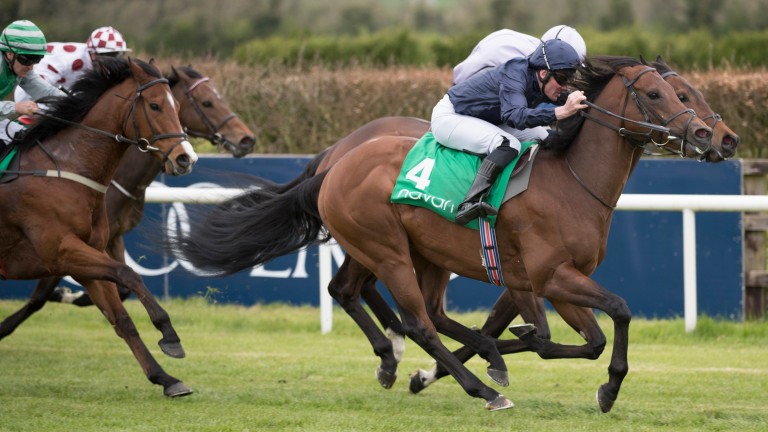 Washington DC and Seamie Heffernan (near side): winning the Woodlands Stakes last year

Washington DC, trained by Aidan O’Brien and set to be partnered by Ryan Moore, faces seven rivals as he bids to win the Listed Woodlands Stakes for the second consecutive year following last season’s neck victory.

The well-travelled five-year-old performed creditably on his most recent start at Meydan last month, when finishing fourth in the Group 1 Al Quoz Sprint won by Godolphin’s Jungle Cat.

Speaking on Sunday, O’Brien said: “Washington DC ran very well in the Al Quoz and we’ve been happy with him since. Hopefully, the ground will dry out a bit more as that would suit him.”

Whereas O’Brien hopes the rain stays away, Willie McCreery would welcome showers for his runner Downforce – already a Listed winner at this course this season, before finishing runner-up in the Group 2 Gladness Stakes over seven furlongs ten days ago.

“We’re keeping Downforce going while there is ease in the ground, so any showers we get will help. The trip is about a furlong short of ideal but he’s in good form,” McCreery said.

British interest centres on Paul Midgley’s eight-time winner Final Venture, the mount of Leigh Roche, who boasts a fitness edge on some of his rivals having already had four starts this calendar year.

Midgley said: “Final Venture is a good old traveller and the stiff five furlongs at Navan should suit him well.

“You should never be frightened to travel with them and he goes there with a decent chance. I have a good record when sending horses to Ireland and I just hope it continues.

“Final Venture has been a difficult horse to place since doing so well at Meydan last year and then winning at Haydock in June.

“He wasn’t at his best when running at Meydan this year and he didn’t handle the bend well at Doha last time. But I’m sure this horse is capable of winning more Listed races.”

The Fozzy Stack-trained Son Of Rest, runner-up to Downforce at this course 16 days ago, is fitted with blinkers for the first time, while Jim Bolger is represented by the lightly-raced Smash Williams.

A Group 3 winner as a juvenile, Smash Williams lost out in a photo finish on his first start of the season at Naas last month and connections will hope he can go one better.

Vazirabad to be aimed at Royal Ascot and Goodwood but Stayers...