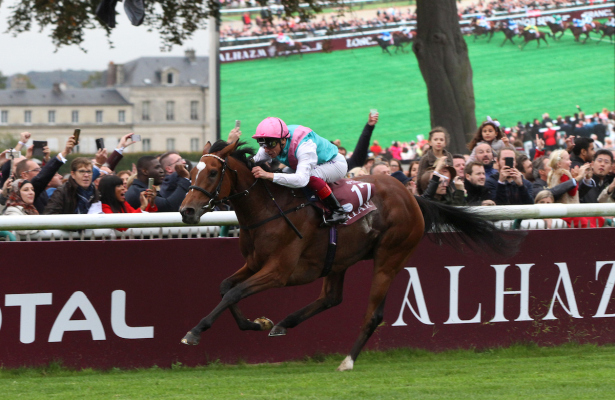 The stakes action was lighter this weekend with Saratoga and Del Mar
wrapped up. Belmont Park, Los Alamitos and Kentucky Downs presented some solid
runners, but the most anticipated run came overseas.

Enable finally returned
after last year’s win in the Group 1 Prix de l’Arc de Triomphe. The super filly missed her spring campaign due to a
knee injury, but she looked ready to roll in her return Saturday.

With connections eyeing another Arc, run Oct. 7 this year, Enable received
her first test in the Group 3 September Stakes at Kempton Park, going 1 ½ miles
over a synthetic course.

The encouraging part was watching Enable best Crystal
Ocean, winner of the Group 2 Hardwicke Stakes and runner-up in the Group 1 King
George VI and Queen Elizabeth Stakes. The September Stakes went off with only
four horses though, while the Arc will have a larger field full of European
stars.

One race off an 11-month layoff does not seem like a lot of time to prepare for
a prestigious race like the Arc, but the way she drew away from Crystal Ocean,
who was far ahead of the other two, was encouraging to watch and, hopefully, a
hint of what she will do with a race under her belt.

At Ellis Park, the 4-year-old Arch colt sat off the pace to beat Zapperini by a
head going 1 ¼ miles. The Kentucky Downs race was even longer at 1 ½ miles,
with Arklow rallying from eighth in the 12-horse field. The favorite, previous
Turf Cup winner Oscar Nominated, finished fifth.

Arklow broke his maiden at 3 going 1 1/8 miles over Keeneland’s turf course,
then cut back to win the Grade 2 American Turf over Good Samaritan at 1 /16
miles. His one attempt at a Grade 1 was in this year’s Old Forester Turf
Classic, where he finished fourth over a yielding course.

Gas Station
Sushi can improve her resume this fall

The lightly-raced Gas Station
Sushi had been away four months before returning in the Beverly J.
Lewis Stakes Saturday. She was an impressive debut winner in August of her
2-year-old season, then waited until April to make her second career start. She
won as the favorite in Keeneland’s Grade 3 Beaumont Stakes, then ran back third
in the Grade 2 Eight Belles at Churchill Downs.

Her return at Los Alamitos was an impressive one, where she won the Beverly J.
Lewis by six lengths. This 3-year-old filly received a lot of buzz this spring,
although she did not make the Kentucky Oaks trail in time. With two stakes win,
and a show finish in a competitive field, Gas Station Sushi looks ready to continue
racing this fall. If she does return in competitive races, whether it be at
Keeneland or Santa Anita, or even Del Mar’s fall meet, she has a chance to live
up to some of the hype she received early in her career.

World of Trouble seems to like his
new division

World of
Trouble earned back-to-back turf sprint victories when he ran off in
the Allied Forces Stakes by 5 ¾ lengths. Before trying the Kentucky Derby trail
at Tampa Bay Downs, World of Trouble won the Pasco Stakes by 13 ¾ lengths. He returned
to sprinting in the Grade 2 Woody Stephens at seven furlongs, finishing fourth,
then shortened up on the turf to wire the Quick Call Stakes.

Though his last two starts have not been in
graded company, the speedy World of Trouble might have found his best stride on
the grass. It’s too early to say he’d be a top contender in the Breeders’ Cup
Turf Sprint right now, as he also received class relief in his last two starts,
but the 3-year-old has two wins on the New York circuit to back up the surface
switch, and judging by the Allied Forces, he looks like he’s ready to try
graded company in this division.

editor - December 27, 2018
0
Protesters will take a stand outside the Boxing Day Races today, arguing the sport is "fundamentally cruel". The Coalition...