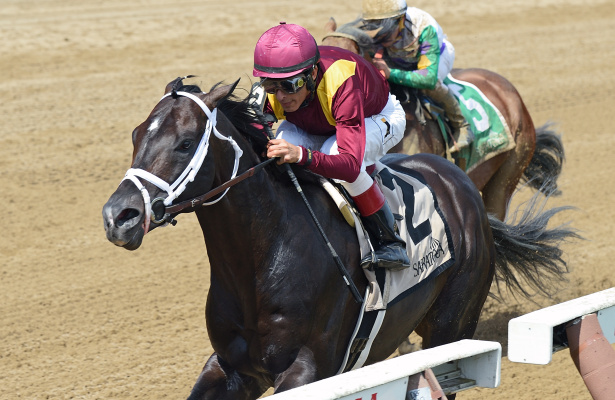 Each weekend, Horse Racing Nation previews the top races to tune into coast to coast and runs down the main contenders. Post times are all in Eastern Time.

It’s been more than a year now since promising sprinter Coal Front faced the starter due to sustaining a condylar fracture and subsequently undergoing surgery following last year’s Gallant Bob (G3) victory. He finally returns to the races this weekend in the Grade 3 Bold Ruler Handicap at Belmont Park. The race attracted just five others, including surprising entrant Delta Prince, who will be making his first dirt start in nearly two years off a fourth in the Woodbine Mile (G1). All in all this looks like a good return spot for Coal Front, who will likely be able to grab an uncontested lead from post four. Post time is 5:08 p.m.

The 2-year old Philosophy will debut for trainer Mark Casse and owner Stonestreet Stables in Keeneland’s fourth race. The Speightstown colt is a half-brother to Grade 1 winners Tara’s Tango and Visionaire and Grade 1-placed Scarlet Strike. A full field of 12 is assembled, and Philosophy will break from post three. The race is 5 ½ furlongs on the turf and will go to post at 2:45 p.m.

California shipper Prime Atrraction was named the slight favorite on the morning line for the Grade 2 Fayette Stakes at Keeneland. The 5-year old last won a race when slightly upsetting the 2017 edition of the Native Diver (G3) but has been competitive against top company since. Trained by James Cassidy, Prime Attraction prefers to race on or near the lead but will have to compete with Leofric for that honor. By Candy Ride, Leofric was last seen finishing a solid third in the Woodward (G1) at double digit odds. Hofburg will also attract plenty of betting attention despite being the lone 3-year old in a field of older runners. He and Leofric were installed as the co-second choices. Only four others are entered to run, including Rated R Superstar who already owns a victory at this track. Post time is 5:30 p.m.

Zipper Mischief to be unveiled

Trainer Blake Heap sends out first-time starter Zipper Mischief, a 3-year old Into Mischief colt out of multiple graded stakes winning turf sprinter Unzip Me. Owned by Harris Farms, the colt has shown some potential and has been giving a 6-1 shot in Santa Anita’s fifth race, carded for a mile on the turf. The race is restricted to California bred or sired maidens, 3 years old and upward. Red Envelope will go favored off three close decisions in as many career starts. Post time is 5:07 p.m.

A star at Meydan earlier in the year, Rayya has not lived up to expectations since coming to the U.S. So trainer Bob Baffert is trying the filly on turf for the first time in the Grade 3 Autumn Miss Stakes. Despite the Breeders’ Cup races being just a week away, the race drew a full field of 14. Rayya, who was tabbed at 12-1 on the morning line, will break from post 11. Edgewood (G3) winner Toinette, who was supplemented to the race, is the 9-5 heavy favorite despite the size of the field and will exit post five. Post time is 7:40 p.m.

Ami’s Mesa is your textbook example of a horse-for-course. Of six lifetime victories, five of those came at Woodbine, where the mare last raced in August of last year. Now 5, Ami’s Mesa will return to Woodbine in the Grade 3 Ontario Fashion Stakes. For fillies and mares 3 years old and upward, the six-furlong race drew a large field of 12. Ami’s Mesa drew post 10. Meanwhile, Moonlit Promise, another Woodbine specialist, will be looking to defend her title while breaking from the rail. There appears to be some pace in here, giving both mares a pace to chase. Post time is 4:57 p.m.

Pricey Keeneland yearling to the races

Gun It, who sold for $2.6 million at last year’s Keeneland September sale, debuts in the Churchill Downs nightcap for trainer Steve Asmussen. Owned by Mandy Pope’s Whisper Hill Farm and Three Chimneys, he’s 7-2 on the morning line and taking on a number of horses with racing experience on the “Stars of Tomorrow” card for 2-year-olds. The Tapit colt is out of Miss Besilou, a Medaglia d’Oro mare. Post time is 6:06 p.m. on a card that includes the Rags to Riches Stakes for juvenile fillies.

Sun Racing’s top picks ahead of today’s racing at York and...

editor - September 9, 2018
0
RACING FANS are in for a Sunday afternoon treat, with high-class action from York as well as a good card at Fontwell. The Sun...

Who won the 2.05 at Newmarket live on ITV TODAY?