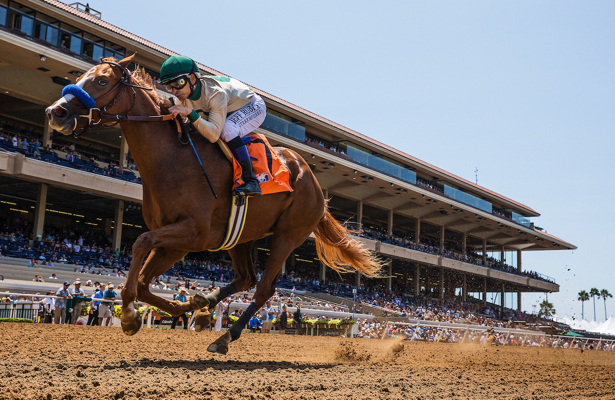 There’s no doubt Keeneland and Woodbine will
turn out impressive turf races with their stakes this week, but Santa Anita
Park will likely receive attention for one of its smaller stakes. American Pharoah’s
little sister Chasing Yesterday is likely to return to the races, where she’ll
have a chance to rebound off her last effort.

It’s the last major weekend ahead of the
Breeders’ Cup, as most of the big horses are preparing for the World
Championships.

Here’s what we’ll be watching for:

Chasing
Yesterday, the 2-year-old half-sister to American Pharoah, will likely
get another go at stakes company. This time she’ll remain at her Southern
California-base to run in Sunday’s Anoakia Stakes at Santa Anita Park.

Sired by Tapit, Chasing Yesterday was an impressive debut winner at Del Mar. The
4 ¼-length win convinced trainer Bob Baffert to send her to Saratoga for the
Spinaway, where she ran into trouble. After going off as the favorite, Chasing
Yesterday struggled over the track, gained no ground and finishes seventh.

Baffert speculated it could have been too much too soon. It also didn’t help when she lost a shoe in the race. Chasing Yesterday has
been working at Santa Anita Park since late September and has three respectable
works registered. She’ll also have the benefit of running out of her own stall
versus shipping.

Baffert nominated a second filly for the six furlong sprint but said Chasing
Yesterday will likely be the only one running. The other nomination is Mother Mother,
second in the Del Mar Debutante.

Also probable for the Anoakia is Andyoushallreceive, a debut winner at Los Alamitos,
and Watch Me Burn, a winner in maiden claiming and starter optional claiming.
She was last of five in the Debutante.

A true international race at Woodbine

The Grade 1 Canadian
International is shaping up as an intriguing field between the locals,
the Americans and the Europeans. A handful of Grade/Group 1 winners are likely
to contest the 1 ½-miles turf event at Woodbine, making it an international
event to look out for.

Leading the home team is Johnny Bear, a two-time winner of the Northern Dancer
Turf Stakes. The 7-year-old gelding was winless for a year in between the two
races. He’ll look to carry that same form into the Canadian International and
make up for a 10th-place run last year.

Spring Quality leads the American contingent. He picked up his first Grade 1 in
the Manhattan Stakes during Belmont Stakes weekend, got the show finish in the Sword
Dancer Invitational, then ran a puzzling seventh in the Joe Hirsch Turf
Classic. Motion also has Mekhtaal, a Group 1 winner in France who was second in
the Northern Dancer after moving stateside.

Other strong American runners include Funtastic and Focus Group from the Chad
Brown stable. Funtastic broke through in the Grade 1 United Nations before
turning around to run seventh in the Sword Dancer. Focus Group is also in the
improve, recently winning the John’s Call Stakes. Brad Cox-trained Arklow also
looks dangerous off his Kentucky Turf Cup victory.

Rushing Fall has showed a liking to the
Keeneland turf, and she’ll be back Saturday for the Grade 1 Queen
Elizabeth II Challenge Cup. The QE II is 1 1/16 miles, the same
distance as Rushing Fall’s Jessamine win at 2. Last year’s Breeders’ Cup
Juvenile Fillies Turf champion also won at a mile here in the Appalachian. She has
five wins from six career starts, finishing second in her lone loss.

Her main stateside competition would likely
be Fatale Bere, who won the Del Mar Oaks in her last start. Grouped stakes
winners from Europe – Nyaleti, Pollara and Mission Impassible – are also among
those invited to the Keeneland feature.

Final “Win
and You’re In” qualifier

Wednesday’s Grade 2 Jessamine
Stakes marks the final “Win and You’re In” Breeders’ Cup qualifier,
with the winner receiving a spot in the Juvenile Fillies Turf. The Jessamine is
1 1/16 miles over Keeneland’s turf, with My Gal Betty and Fierce Scarlett
leading the way.

Fierce Scarlett hails from the Chad Brown stable and has a maiden win from two
starts. The Florida-bred daughter of Scat Daddy ran this same distance at
Belmont Park when she won by 4 ½ lengths. My Gal Betty is making the trip from
Canada for trainer Roger Attfield. She’s been on the board in all four starts,
including a win in the Catch a Glimpse Stakes and a runner-up finish in the Natalma.
The Jessamine will be her first start beyond a mile.

Horse racing tips TODAY: Horses you MUST back at Carlisle and...

Five horse racing events to look forward to this year