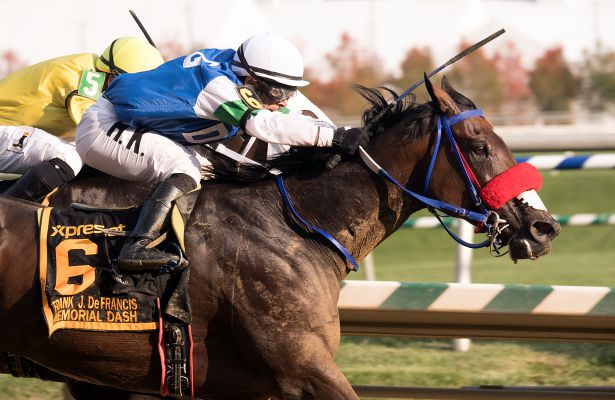 Graded stakes winner Chublicious will look to give trainer Ron Faucheux his second stakes victory of the Fair Grounds meet in Thursday’s $75,000 Thanksgiving Handicap, though the 7-year-old son of Hey Chub has already given his trainer something to be thankful for.

Over the summer, Chublicious took Faucheux across the Pacific Ocean to South Korea when he received an invitation to compete in the Sept. 9 Keeneland Korea Sprint Cup.

“When we got an invitation to run in South Korea it sounded like such a crazy idea at first — a Louisiana trainer running in South Korea,” Faucheux said. “But then when I started thinking about it, was worth a shot. The race was the equivalent to $700,000 in U.S. dollars so it made sense. The people over there really took care of us. They shipped him there privately, my assistant Cory Kofalt was with him the whole way, and it was overall a great experience.

“The Korean Racing Association flew us and the horse out there. I flew out five days before the race, first class. The way they treated us there was great. The Korean ambassador to the United States (Harry Harris) came out and supported us. He was a really nice guy.”

The Keeneland Korea Sprint Cup was Chublicious’ last start. He broke poorly from the gate but managed to finish fourth.

“We thought we had a fit horse going into to it so we just wanted to keep him sound,” Faucheux said. “Our horse was doing great going in but unfortunately for us, we did not break well. We broke dead last out of thirteen and he’s usually one that breaks sharp. We ended up running fourth which was a good race for him.

“He was ready to run but I think the break really cost us because after breaking bad we had to hustle up and then on the turn you could see all the horses put their heads up because of the kickback. The surface over there is not a friendly surface; it’s very, very deep. The sand particles are very big with a lot of kickback.”

Chublicious was acquired by Brittlyn Stable and Faucheux following a victory in the Grade 3 Frank J. DeFrancis Memorial Dash Stakes at Laurel Park in September 2017. He was previously under the care of trainer Claudio Gonzalez and was owned by David Gruskos.

Chublicious’ first start for Faucheux took place in last year’s edition of Thanksgiving Handicap. He finished second behind Yockey’s Warrior and went on to be a runner-up to the same horse in January’s Duncan F. Kenner Stakes.

Prior to the Keeneland Korea Cup, Chublicious spent the summer with trainer David Cannizzo, who trained the horse to a victory in the Mr. Prospector Stakes at Monmouth Park on June 17. He will be in search of his first victory since that effort, which took place three starts ago.

“He’s such a cool horse,” Faucheux said. “We had our mind on running in the sprint stakes races here that what we purchased him to do. He ran two seconds behind (trainer) Al (Stall, Jr.’s) horse Yockey’s Warrior, who is just a monster. So we’re going to run him back in the Thanksgiving Handicap this year, he’s doing really well.”

Chublicious drew post eight in the 10-horse field at morning line odds of 8-1. He will be guided by Adam Beschizza.

editor - April 28, 2018
0
RACING takes place at Leicester today and we have you covered with all the latest runners, results, tips and going news. Get yourself along...