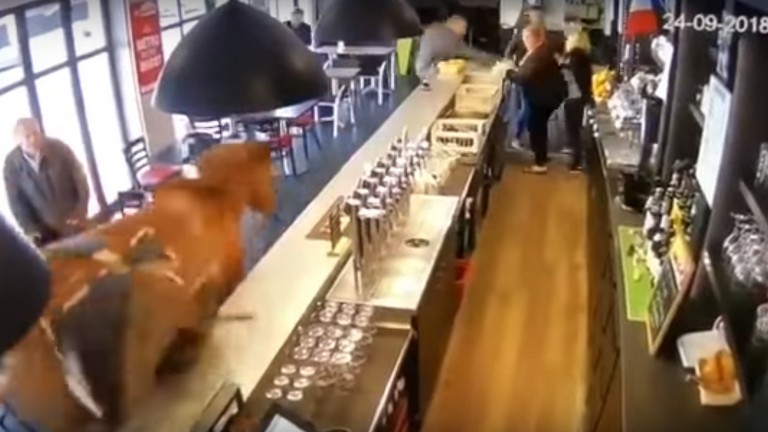 A horse got loose in a bar in Chantilly

When a horse walks into a bar, it turns out the staff do not politely inquire, ‘Why the long face?’ but rather utter chaos ensues – if Monday’s events in Chantilly are anything to go by.

It is one of the oldest set-ups in comedy, but in real life it appears rather more terrifying as customers in a PMU bar found out – at probable cost to their life expectancy.

The racehorse in question, trained by Jean-Marie Beguigne, dropped her rider on the way to the gallops and, with the saddle back around the point of her hips, she came bucking through the bar sending the amassed punters and staff running scared.

Beguigne told Ouest France: “Between the track and the stables, her rider fell off. The filly escaped by going on to the road and crossing a roundabout before entering this bar. It is all quite exceptional.”

The bar’s owner Stephane Jasmin, who posted the video on YouTube, reportedly added: “Then the filly turned around, breaking a table and chairs. We’ve never seen anything like it.”

The horse appeared to make a rather fleeting visit to the bar, skipping the alcohol consumption and instead getting straight into sending tables and chairs flying as everyone ran away in terror before following them out of the door.