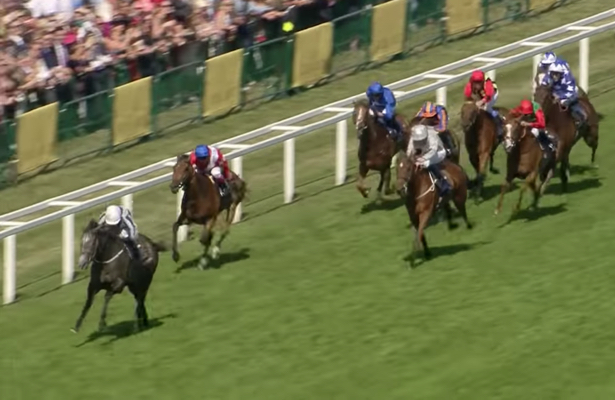 The Breeders’ Cup Challenge is an international series of 85 stakes races whose winners receive automatic starting positions and fees paid into a corresponding race of the Breeders’ Cup World Championships, which will be held at Churchill Downs in Louisville, Ky., on Nov. 2-3.

As a part of the benefits of the Challenge series, the Breeders’ Cup will pay the pre-entry and entry fees for Alpha Centauri to start in the Mile. Breeders’ Cup also will provide a $40,000 travel allowance for all starters based outside of North America to compete in the World Championships.

Alpha Centauri, a gray daughter of Mastercraftsman (IRE) out of Alpha Lupi (IRE) by Rahy, and trained by Jessica Harrington, has become Europe’s top miler with today’s win. Ridden by Colm O’Donoghue, Alpha Centauri (9-10) broke well and stayed along the stand’s side as the 11-horse field broke into two groups down the straight Deauville course. Tracking behind With You (GB) through the first six furlongs, Alpha Centauri pulled out and passed With You and easily moved the front. Recoletos (13-1) gave chase but was no match for the winner. With You finished third.

“She’s a once-in-a-lifetime filly for me to train – she’s amazing. She worries me sometimes before the race as she’s so relaxed. I think ‘God, is she going to wake up at all!’” said Harrington to the Racing Post. “When she gets to the front she just keeps going.”

Alpha Centauri has now won six races in nine starts. Following her victory in the one-mile Tattersalls Irish 1000 Guineas (G1) against fillies on May 27 at the Curragh at 12-1, she unleashed her enormous talent at Royal Ascot on June 22, winning the one-mile Coronation Stakes (G1) by six lengths. She took on older fillies and mares for the first time in the one-mile Tattersalls Falmouth Stakes (G1) at Newmarket on July 1, powering to another six-length win.

The Niarchos Family (also under the name Flaxman Holdings) has enjoyed unparalleled success in the Breeders’ Cup Mile, winning it six times. In 1987, Miesque won the Mile under the name of patriarch Stavros Niarchos. Miesque repeated as the Mile winner at Churchill Downs the following year. Spinning World captured the Mile at Hollywood Park in 1997. Domedriver (IRE) won it at Arlington Park in 2002; the filly Six Perfections (FR) captured the Mile in 2013 followed by Karakontie (JPN) in 2014.

The Everest racing tips, field and form from Randwick and Caulfield

editor - October 13, 2018
0
Ray ThomasANAHEED provided trainers Peter and Paul Snowden with another impressive early season juvenile winner after she romped home with the opener on...

Cheltenham Festival 2018: Text and radio coverage of the Champion Hurdle