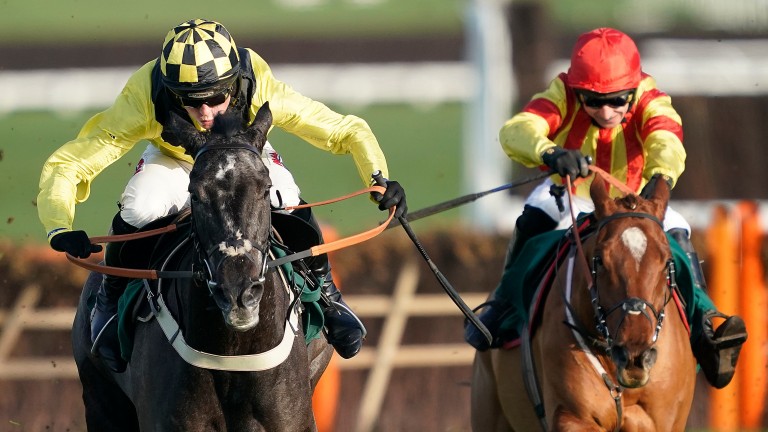 Elixir De Nutz (left) gave 10lb and a beating to Jarveys Plate, who won by 13 lengths next time out

There are two certainties when it comes to the Unibet Tolworth Novices’ Hurdle – a small field and classy horses.

Last year Summerville Boy got the better of Kalashnikov, the year before Finian’s Oscar saw off Capitaine. In 2016 Yorkhill beat O O Seven and Agrapart and the year before that L’Ami Serge defeated Jolly’s Cracked It.

This year’s six is the joint-biggest field in that time and they are not short on quality. The Nicky Henderson-trained Rathhill heads the betting on the back of a one-and-a-half length maiden hurdle victory at Newbury.

If that sounds somewhat underwhelming for a 5-4 favourite going into a Grade 1 then watch the replay. The style of the win will impress you. Geraghty was still on the bridle after the last and when he asked Rathhill to put the race to bed he did so instantly in the manner of a good horse and Henderson immediately nominated this race for the former pointer afterwards.

Henderson has won this race four times since 2011, three times with Geraghty in the saddle, and said: “It’s a good, competitive race but it always is. He did what he had to do at Newbury and I was impressed with him there. It’s a big step up to a Grade 1, but I think he’s got a big future and I hope he’s up to this at the moment, but he’s only a baby.”

His chief market rival is the Colin Tizzard-trained Elixir De Nutz, who is two from three since joining the yard from Philip Hobbs’ earlier this season.

His only defeat came first time up, when Olly Murphy’s talented Thomas Darby got the better of him at Cheltenham, but a Grade 2 win and then a novice success under a 10lb penalty from subsequent runaway winner Jarveys Plate – both at Cheltenham – means there is more substance to his form than Rathhill’s.

“He’s second favourite so that tells you he has a chance,” said Tizzard. “He’s won his last two at Cheltenham making all and I think this will be a similar test. The one he beat at Cheltenham last time came out and won there on New Year’s Day by 13 lengths so the form’s good and he’s a good young horse.”

Before Henderson seized control of this contest it used to be the domain of Paul Nicholls, who won four renewals in six years from 2003 with the likes of Thisthatandtother, Noland, Silverburn and Breedsbreeze.

He runs two this year, with stable number one Harry Cobden on Southfield Stone and the man he replaced, Sam Twiston-Davies, aboard Grand Sancy – but Nicholls suggested there was no clue in the jockey bookings.

“Harry didn’t have the choice, I left him on Southfield Stone as he’s won three on him and no-one else has ridden him over hurdles whereas Sam has gone well on the other and does well for those owners – to be honest there’s nothing between the two of them.” 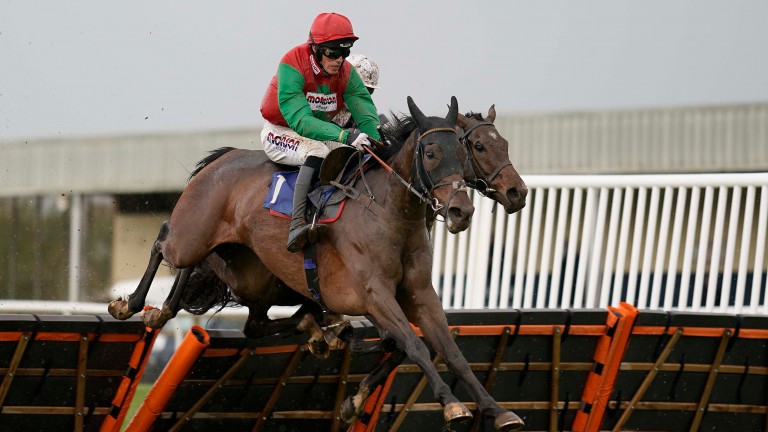 Both have won three times this season, with the officially 3lb higher rated Southfield Stone doing so by a combined 16 lengths from three attempts. Grand Sancy’s three wins have come by narrower margins, while he also finished second to Itchy Feet – who subsequently finished behind Elixir De Nutz when giving the Tizzard runner 5lb – in a Listed race at Kempton in October, and fourth last time out behind Mohaayed in the Grade 3 Betfair Exchange Trophy at Ascot.

Nicholls said: “Grand Sancy keeps improving, he ran very well in the big hurdle race the other day and he could have finished a bit closer with a clear run. He’s tough and a bit like Quel Destin – he keeps galloping. The other lad’s not come off the bridle in three runs so we don’t really know where we are with him – we will after tomorrow. Both are nice, live chances.”

The odds-on favourite that day, who he got within a length and three-quarters of at Newcastle, has since won by four-and-a-half lengths at Newbury but despite the form receiving a major boost, Skelton remains pessimistic of his chances.

“It’s a very strong race, but we like him and he’ll be learning plenty here,” he said. “We don’t expect him to be winning tomorrow, it looks very hard, but we’ll see how we get on. We’re aware of the task he faces, and it’s not going to be easy.”

Completing the line-up is Fergal O’Brien’s Mercy Mercy Me, a Sandown bumper winner back in 2017 who was eighth in the Champion Bumper at the Cheltenham Festival last year – but yet to get off the mark in two starts over hurdles this season.

His trainer said: “Ideally we’d love the ground a bit softer, but he’s in good form and we’re all keen to give it a shot so we’re looking forward to it. He ran very well at Cheltenham [in the bumper], not as well at Aintree. He wasn’t disgraced the last day at Sandown in a Grade 2 so we’ll give it a shot.”

editor - September 16, 2018
0
ALPHA CENTAURI has been retired after suffering an injury in the Matron Stakes. Following her shock defeat at Leopardstown, connections announced the filly had...

Horse racing – Walsh wins first race back after breaking his...