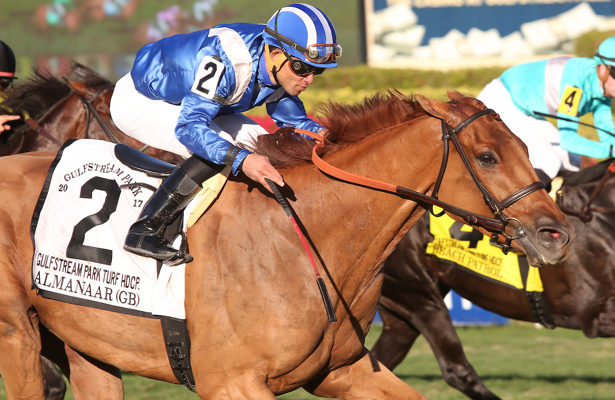 Following a runner-up finish in the Arlington Million last weekend behind stablemate Robert Bruce, Almanaar could target another Grade 1, million-dollar event Oct. 6 at Keeneland in the Shadwell Turf Mile – a race that has been sponsored by his owner, Shadwell Stables, since 1999.

Trained by Chad Brown, the 5-year-old son of Dubawi sat mid-pack to the outside of horses in the Arlington Million and began making his move around the far turn, where he was caught wide. Despite displaying a nice turn of foot down the stretch under jockey Joel Rosario, he was unable to hold off stablemate Robert Bruce, who won by a half-length.

The Arlington Million marked only the second start of the season for Almanaar who, prior to an injury that put him on the shelf 16 months won the Grade 1 Gulfstream Park Turf Handicap on February 11, 2017.

“I think he can run anywhere from a mile to a mile-and-a-quarter, and maybe a little further,” said Shadwell Stables’ racing manager, Rick Nichols. “I briefly talked to Chad and he said, ‘We might just give him a little break and head toward the Shadwell Mile.’ It would have been nice to have one more race in him (prior to the Arlington Million) but he did well. Maybe if he hadn’t gone so wide he might have got it.

“I was very happy with him, though. He beat some very good horses.”

Shadwell Stables has won Keeneland’s prep for the Breeders’ Cup Mile on three occasions but has not done so since Altibr scored back in 2000. Shadwell swept back-to-back editions of the event with Dumaani in 1995 and 1996 before sponsoring the race.

In Almanaar’s pair of 2018 outings, he appeared a bit rank in both of the race’s early stages.

“I think that might be why Chad was thinking about the (Shadwell Turf) Mile,” Nichols said. “There wasn’t much pace in the Million, and he does have a tendency to get a little keen. Maybe with a bit of a faster pace he can relax and run along a little bit.”

In a total of 16 career starts, Almanaar has found the winner’s circle six times and secured lifetime earnings of $685,849.

What is the Curse of Apollo in horse racing?