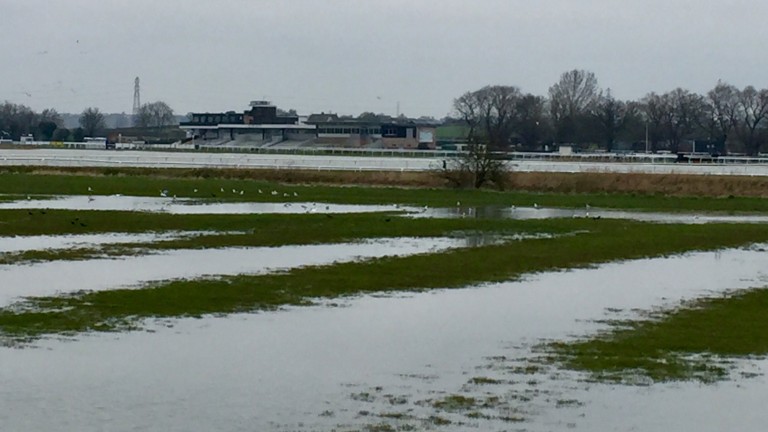 The scene at a flooded Huntingdon on Sunday

Only the all-weather card at Wolverhampton goes ahead in Britain on Easter Monday after all other scheduled meetings were cancelled.

In Ireland Cork passed an early inspection and there are no expected problems at Fairyhouse, which stages the BoyleSports Irish Grand National.

Chepstow and Fakenham both fell victim to waterlogging at 7am, while Market Rasen followed after initially calling a 9am inspection first thing in the morning. Plumpton cancelled after a second inspection at 10am.

Chepstow reported an inch (25mm) of rain overnight, while Fakenham had received 10mm by 7am with rain forecast to continue all day.

Market Rasen had initially omitted to call an inspection, but overnight rain necessitated a check at 9am, by which time there was standing water on the course.

Huntingdon and Redcar had already been called off.

At Fairyhouse a total of 20mm of rain was forecast from Sunday evening through to Monday afternoon and 8mm fell overnight, leaving the ground heavy.

Clerk of the course Brendan Sheridan said on Sunday afternoon: “We’re expecting plenty of rain tonight and continuing until around 3pm tomorrow.”

Redcar clerk of the course John Sanderson said: “It’s very sad and it’s a disappointing start to the year as it’s usually a good day for us. In a normal year we’d hope to get an attendance of 3,500-4,000.”

There will only be all-weather racing at Lingfield in Britain on Tuesday after Pontefract joined Wincanton in cancelling.

Coral PR director Simon Clare played down the effect of a much-reduced programme on betting turnover.

“Bank Holidays are big betting days because they are days off but even then the core meetings take the lion’s share of the money,” he said.

“There’s no terrestrial TV coverage on Monday and as long as Fairyhouse is the anchor, with the Irish Grand National, and two or three supporting fixtures you’ll still take a lot of the money you would have done.

“People who fancy a bet on their day off will gravitate to those meetings that are left on.”

Chepstow – cancelled due to waterlogging

Fairyhouse – no inspection. Heavy after 8mm of overnight rain and more forecast

Fairyhouse – no inspection. Soft to heavy, heavy in places with rain forecast

Catterick – Heavy, soft in places. Up to 15mm forecast on Monday

At the heart of the action on a thrilling day of...