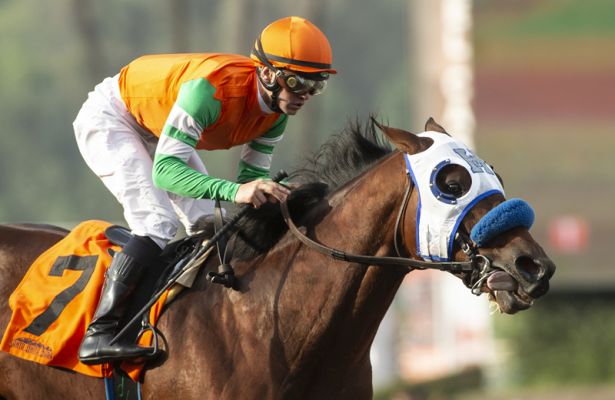 Breeders’ Cup winner Battle of Midway faced only two other horses, but still had to fight for the
win in Sunday’s Grade 3, $100,000 Native Diver Stakes at Del Mar. It was the second win in four starts this year
since returning to racing after proving subfertile at stud.

Under Flavien Prat, Battle of Midway took the lead on the inside and carried
Dabster wide into the first turn. The first quarter-mile went in 23.60 before
Dabster pulled ahead by half a length. The half-mile went in 47.93 and the two
were nearly even again as they hit three-quarters in 1:12.93.

While Battle of Midway scored an easy victory last out in the Comma to the Top
Stakes, Dabster proved to be a game rival. He kept gaining in the stretch, and
Battle of Midway fought back with every step.

Battle of Midway completed the 1 1/8 miles in 1:50.23 over Dabster. Isotherm
trailed throughout and was a distant third.

Trained by Jerry Hollendorfer for WinStar Farm and Don Alberto Stable, Battle
of Midway ran his biggest race when he defeated Sharp Azteca in the 2017
Breeders’ Cup Dirt Mile. He was sent to stud at WinStar before returning to
Hollendorder in Southern California.

Ellicazoom ready to fire at the Gold Coast

Across the Board: Breeders’ Cup Saturday contenders, longshots