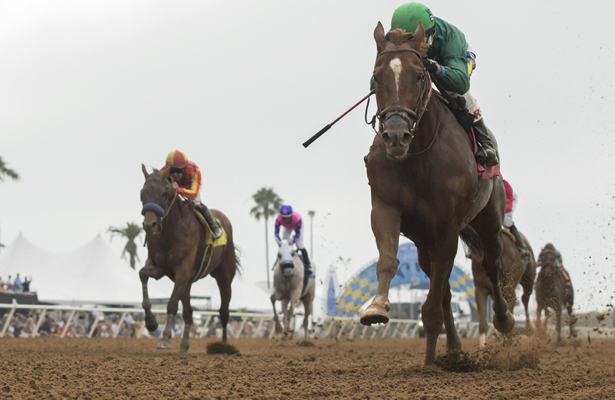 Trainer Leonard Powell had thoughts of running Beach View in the $1 million TVG Pacific Classic last August. But days before the race, the 5-year-old Maryland-bred son of Giant’s Causeway incurred some cuts on a front leg in a stall accident.

It’s nearly three months since then, and four since Beach View’s upset victory over Hoppertunity in the Cougar II Handicap. But now the Levy Racing colorbearer takes on another 1 ½-mile assignment in Friday’s Grade 2, $200,000 Hollywood Turf Cup.

The Cougar II ran at 12 furlongs on the main track.

“It took some time to heal and get back to training, but I think that fitness-wise I have him back to what he was for the Cougar,” Powell said. “It’s never easy to come back from such a layoff, especially in a 1 ½-mile race, but we are going to try.”

The Hollywood Turf Cup goes as Race 6 on Friday, with a 6 p.m. ET post time. Mike Maker (Krewe Chief, Bigger Picture) and Graham Motion (Can’thelpbelieving) will ship in runners to fill out a field of eight.

“She just had her first work back (since early October) and will work again next weekend,” Powell said. “It’s 50-50 if she will run, but we’ll see how she looks.”

Melbourne Cup dream for Charlie Fellowes and Prince Of Arran

Op/Ed: Racing Roulette, A Good Idea And Why It Will Never...