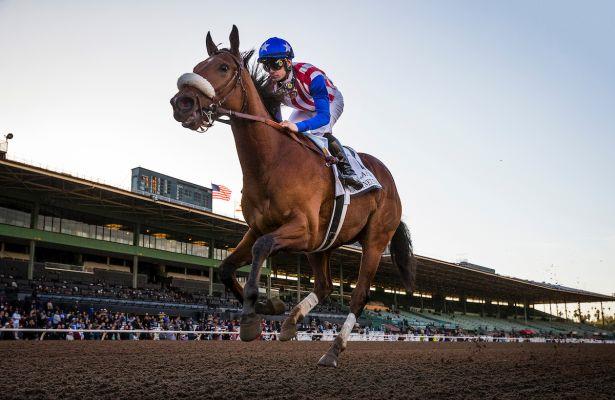 Dual Grade 1 winner Bellafina
romped in her 3-year-old debut, pulling away to win Sunday’s Grade 2, $200,000 Santa Ynez Stakes
at Santa Anita by 8 ½ lengths. Jockey Flavien Prat needed only a hand ride to
guide the daughter of Quality Road home in the seven-furlong event.

The Santa Ynez was the first start for the Simon Callaghan-trained Bellafina
since she finished fourth in the Breeders’ Cup Juvenile Fillies as the favorite.
The win awarded 10 additional points toward the 2019 Kentucky Oaks on May 3.

“She wasn’t even blowing. Just standing after the race, she was so composed and
it was like it was nothing for her,” Callaghan said. “We’ve always thought a lot
of her and made no secret of that, so it was nice to see her put on that sort
of performance.”

“We went in so confident to the Breeders’ Cup, but it was just not meant to be,”
Shah said. “It was not her day. Obviously today, she needed to come back and
show us what she did today to validate that she’s amongst the best fillies in
the country.”

Bellafina was unsurprisingly the heavy 2-5 favorite in the five-horse Santa Ynez. Tomlin broke best, but Mother Mother used her rail spot to gain the lead and led the first quarter-mile in 22.67. Bellafina was off a step slow before moving up into second over Sold It. Reflect and Tomlin followed close in the compact field.

Bellafina continued to inch closer to Mother Mother and took over with three furlongs to go and ticked a half-mile off in 45 seconds flat. It didn’t take much encouragement from Prat for Bellafina to stride away. The winner galloped home as the margin continued to grow.

“I just left it to Flavien. He knows the filly very well. I said, ‘Look, I think you’re on the best filly,’ and I just leave it to him,” Callaghan said. “He’s such a smart rider and I hate tying people down to instructions in regard to the race. Just let it unfold and just get the job done.”

Mother Mother was a distant second and Tomlin rode the rail for third over Reflect and Sold It.

Bellafina was purchased for $800,000 last year at the Fasig-Tipton Florida Select 2-Year-Olds in Training Sale. She is close to earning that price back, with the Santa Ynez pushing her earnings to $708,000. Her record is now 4-1-0 from six starts.

She ties for second with Restless Rider on the Kentucky Oaks leaderboard with 22 points. Breeders’ Cup Juvenile Fillies winner Jaywalk leads with 30.

While Bellafina’s next race isn’t set in stone, the Santa Anita Oaks (G1) on April 6 could be the final stop before the Kentucky Oaks at Churchill Downs. Other Oaks preps at Santa Anita include the Las Virgenes (G2) on Feb. 9 and the Santa Ysable (G3) on March 10.

“We’ve just loosely talked about two races before the Santa Anita Oaks, so we’ll just see how it comes out,” Callaghan said. “We’re in a good position now. We’ve got the first race of the year under our belt. Kaleem’s ultra patient and we’ll just let the filly tell us the best plan.”

Sunland Derby and Oaks winners and predictions from our racing expert

Don’t back these horses this Tuesday