It looks a good renewal of the 32Red King George VI Chase on Boxing Day with last year’s star novice, Might Bite, this season’s Betfair Chase winner, Bristol De Mai and the reigning champion, Thistlecrack, all locking horns at Kempton.

All have questions to answer, though, and I’m not as convinced about Might Bite’s chances as the market seems to be. Yes, he’s long looked a King George type and has plenty of potential, but we’ve only seen him out of novice company once and that was in a penalty kick of a race around Sandown.

Much of his 11/8 price is down to his performance in the Kauto Star Novices’ Chase on this card a year ago, when he would’ve put in a very good time relative to Thistlecrack’s King George had he managed to negotiate the final fence.

The final fence at Kempton has produced its fair share of drama over the years and so has the Cheltenham hill, with Might Bite contributing to the rich history of both last season as he drifted markedly to his right after the last at the Festival.

Miles clear in the RSA Chase when he went walkabouts after the final obstacle, he almost threw it away but got going again, largely thanks to a loose horse, to just get back up in a thrilling spectacle.

It’s not the first time he’s wandered about on the run-in and, though he was pretty well behaved on his comeback at Sandown, he’s clearly a horse that has his own ideas about the game.

His biggest asset is his speed, and he could well kill off plenty of the opposition mid-race on Boxing Day, but he’s not going to get his own way out in front with the in-form Bristol De Mai in opposition and there is the chance the duo will turn this into a severe test of stamina.

I’m not sure that will suit Fox Norton and Colin Tizzard’s other horse, the reigning champ Thistlecrack, has plenty to prove after his below-par reappearance in the Long Distance Hurdle. I think he’ll come on plenty for that and run well, but this is the hottest chase he’s run in yet and it takes a huge leap of faith to believe he’ll be ready for this just 25 days on from Newbury.

Bristol De Mai is a massive player on his Betfair Chase form and if the rain arrives in significant quantity on Christmas Day night then his chance is only going to increase, but the 25mm that was in some long-range forecasts looks like being wide of the mark.

I’d want it to be very soft bordering on heavy to be backing Bristol and with that looking unlikely the one I want to be on is Nicky Henderson’s second string, WHISPER, at the general 15/2.

He was the one just run out of things in that ridiculous RSA Chase last season and he finished behind stablemate Might Bite again at Aintree, but he looks to have made a big step forward this season following that terrific second in the Ladbrokes Trophy at Newbury.

A neck second to Total Recall, giving him a stone off a mark of 161, the pair were nine lengths clear of the third with Whisper’s class and stamina on view as he put in his best performances over fences yet.

He’ll need both of those qualities to win a King George, but it’s his stamina that could be the defining attribute against the likes of Might Bite and Fox Norton if this turns into the test I think it might do with a couple of high-class front-runners setting the gallop.

His reappearance win over Clan Des Obeaux reads better following that rivals subsequent exploits and though he’ll have to jump better than he did that day, he should well do now he’s been finely tuned following that excellent Newbury second.

It’s a shame Davy Russell isn’t on board as he’s built up some rapport with this horse, but Aidan Coleman is an able deputy and this spare ride could be some late Christmas present if he can build on his superb form this season. 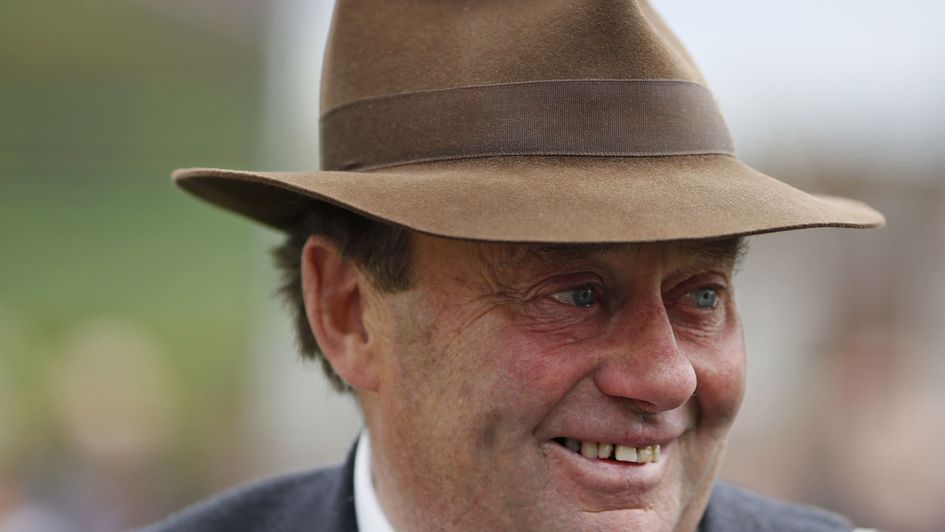 Nicky Henderson: Could have a day to remember at Kempton

It could be a good day for Henderson and I really like the look of his REIGNING SUPREME at 5/1 (General) in the 32Red.com Novices’ Chase earlier on the card.

This horse is a fine-looking son of Presenting that was rated 134 after winning a couple of novice hurdles, but the former pointer was always just biding his time until being switched to fences.

He could be seriously well-treated off that mark now he tackles the bigger obstacles and the horse he beat on his final start last season, Strong Pursuit, came out and won on his chasing debut at Newbury last month.

His work has reportedly been very good and it’s significant Henderson runs him here for his first assignment of the season, as he has an excellent record in this race, winning it four times in the last nine years.

On that basis stablemate Wenyerreadyfreddie is worth a second look as well, but Nico de Boinville has chosen to ride Reigning Supreme and I would think that is with good reason.

Away from Kempton I like the look of SNEAKING BUDGE in the Fairfax Saddles Handicap Hurdle at Huntingdon (1.15) and he’s worth backing at 8/1 (General).

Stuart Edmunds’ five-year-old is lightly-raced and was rated 120 as a juvenile after winning easily at Sandown, but he’s hardly been seen since and has dropped to a mark of 109 in just two runs.

However, he returned from a year off the track with an eye-catching run at Leicester last time, where he stayed on quietly for fourth over what looks an inadequate two miles.

Stepped up half a mile in trip after being dropped 3lb, Ciaran Gethings takes another 3lb off his back and fairly local trainer Edmunds (he’s about 40 miles away in Milton Keynes) has a good record at Huntingdon this year, with two winners and two places from just six runners.

Finally, I like the look of SAFFRON WELLS at 9/1 (General) in the Pertemps Network Handicap Hurdle at Wincanton.

Colin Tizzard is just getting to grips with him having run him twice since he arrived from Neil King’s, but his run when third in a handicap hurdle at Exeter last time was a big step in the right direction.

It looks only a matter of time that he’ll start to improve for the switch in yards and, while Saffron Wells carried a big weight in a Class 3 last time, I want him on side now he runs off a feather weight in a better race.

Carrying 10 stone on Boxing Day, talented claimer Mitchell Bastyan takes a further 5lb off and that can help him defy a mark of 123, just 1lb higher than when he won a handicap at Market Rasen in April.

Ben Linfoot’s Value Bet aim: The Value Bet is designed to generate long-term profit by searching for overpriced horses in the feature weekend races and at the big Festivals in the UK. Running total: +380.89pts to advised stakes/prices (from inception of Value Bet column in January 2010 to current).

Sky Bet are offering EXTRA VALUE to followers of the Sporting Life Value Bet column with exclusive guaranteed advertised prices for at least an hour from the time of publication.

A tribute to John Asher: How the horse racing industry is...

Race-by-race guide and tips for Randwick on Saturday