Marcus Townend for the Daily Mail

The number of fallers suffered by individual trainers at Cheltenham over the past 10 years has been one strand of a British Horse-racing Authority review into equine safety at the track.

The BHA launched a review in April after six horses died at last season’s Festival, three in the concluding Grand Annual Chase. Four horses died at the 2017 Festival and seven in 2016.

Conclusions and recommendations will be revealed by the BHA at lunchtime. But Racemail has learned that the regulatory body will use the figures to try to engage further with jockeys, trainers and others to identify causes of risk at the Festival and in jump racing generally. 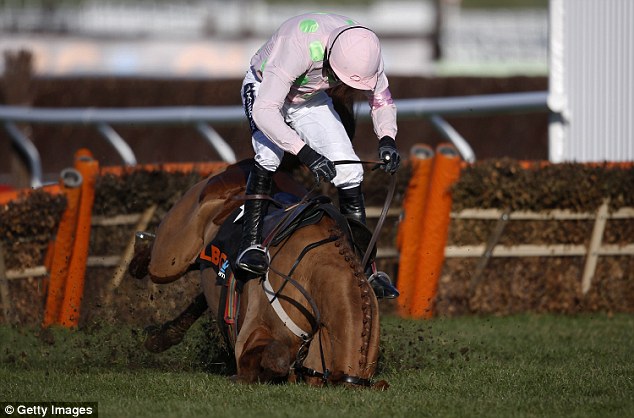 Annie Power, ridden by Ruby Walsh, recovered from this heavy fall at Cheltenham in 2015

A spokesman said: ‘The BHA cannot comment on the specifics before publication but it is true that the review will call on everyone in the sport to play their part in further improving the safety record of British racing.

‘This is likely to include a wide programme of engagement with participants.’

When launched, the review aimed to adopt an evidence-based approach in an effort to improve equine welfare and reduce risk at Cheltenham.

The BHA, aware of the sport’s public perception, say horse fatalities in jump racing have fallen by a third in the past 20 years and are now less than 0.4 per cent. Some argue that they should defend jump racing’s actions on equine welfare more rigorously.

In October there was a debate at Westminster after more than 100,000 signed an e-petition calling on the Government to set up a new equine welfare regulator independent of the BHA.

The 2011 review into Grand National safety was a big success. Changes were made to the famous fences and no horse has had a fatal injury there since.

Pinpointing contributory factors behind fatalities at Cheltenham and the Festival will be a much tougher assignment.

Alan King’s Mia’s Storm one of seven in contention for the...

Who won the 2.25 at Glorious Goodwood live on ITV TODAY?