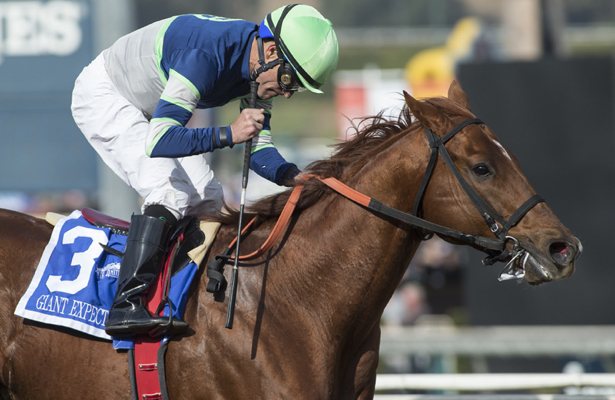 Trainer Peter Eurton has his top 3-year-olds, Core Beliefs and Draft Pick, ticketed for their final starts of the year, and he anticipates “they’re going to be very good horses at the classic distance” following a freshening.

While those two are headed to the sidelines, an example of patience paying off is getting set for his return to the races.

“Giant Expectations is getting fit pretty quick,” Eurton said of the 5-year-old by Frost Giant, who last raced in the March 10 Santa Anita Handicap. The horse upped his last two workouts to six furlongs on dirt, though it’s expected he runs next on turf.

“With the new thing the Pegasus has put up, it would be a good opportunity to find out if he likes it,” Eurton said following Tuesday’s news that the Pegasus World Cup Invitational — which Giant Expectations ran in earlier this year — will have a grass division in 2019 with a $7 million purse.

Campaigned by Exline-Border Racing, Gatto Racing and Garrett Zubok, Giant Expectations will be nominated to Santa Anita Park’s Oct. 6 City of Hope Mile (G2). Eurton also mentioned a trip to Belmont Park for the Oct. 20 Mohawk, a stakes for New York-breds, is a possibility.

“He’s got a lot of options,” the trainer said of a horse that took seven starts to break his maiden but developed into a graded stakes winner.

As for the sophomores, their next spots are locked in. Core Beliefs, by Quality Road, is entered in Saturday’s Grade 1, $1 million Pennsylvania Derby. Draft Pick, a Candy Ride colt, is targeting the Grade 3, $400,000 Oklahoma Derby run Sept. 30 at Remington Park.

“Core (Beliefs) has always been spot on,” Eurton said. “As soon as we stretched him out, he was seeming like a good horse. Draft (Pick) is coming around now — light bulb went on and he started training well.”

Core Beliefs closed to win the Ohio Derby (G3) before fourth last out in the Haskell Invtiational (G1). Eurton would like to see him stay closer to the expected pace setters in the Pennsylvania Derby, though he said with a laugh, “Whether that happens or not is another thing.”

Draft Pick, winner of the Affirmed Stakes (G3) earlier this year at Santa Anita, can cement his trip to Oklahoma with a successful Friday breeze.

Horse racing tips for Leopardstown and Limerick on December 27

Europe urged not to put up barriers to horse movement if...