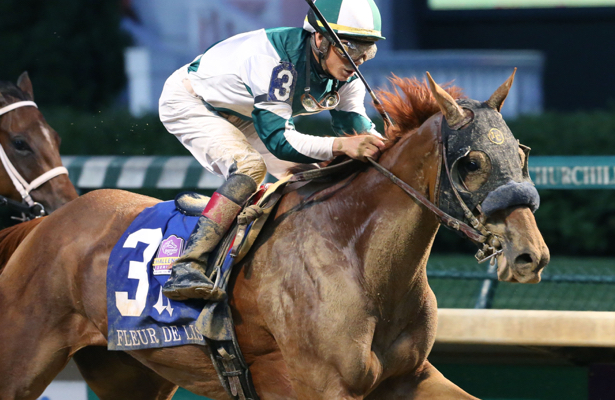 Merriebelle Stable’s
Blue Prize (ARG) turned in her final preparation for the 63rd running of the $500,000 Juddmonte Spinster (G1) next Sunday by working a half-mile in :48.80 over a fast track at Keeneland Saturday morning.

The Juddmonte Spinster is a “Win and You’re In’ race for the $2 million Breeders’ Cup Distaff (G1) at Churchill Downs on Nov. 3, a race the Ignacio Correas IV
trainee has earned a spot in by virtue of her victory in the Fleur de Lis (G2) at Churchill in June.

Blue Prize, who finished third in the slop in last year’s Juddmonte Spinster, comes into this year’s renewal off a nose victory in the Locust Grove (G3) at Churchill
two weeks ago.

“It was not that hard a race; it was just the last quarter of a mile that she ran hard,” Correas said. “It set her up good for this race.”

The First Lady is a “Win and You’re In” race for the $2 million Maker’s Mark Breeders’ Cup Filly and Mare Turf (G1) to be run Nov. 3 at Churchill.

Fourth in the First Lady last year, Dona Bruja finished ninth in the Beverly D. (G1) in her most recent start in an abbreviated campaign that was compromised by
a foot abscess.

Trainer Mark Casse, who has won a graded stakes at Keeneland each of the past seven meets, sent out a quartet of probable stakes runners headed by multiple stakes
winner Valadorna, who covered a half-mile in :49.60 in prepping for the First Lady (G1). Other Casse workers included
Dream Maker (Claiborne Breeders’ Futurity-G1), going a half-mile in :47 and out five-eighths in :59.80, and Darley Alcibiades (G1) hopefuls
Catherinethegreat (4 furlongs in :47 and out five-eighths in :59.40) and
Chocolate Kisses (:49.40 for a half-mile).

Other works of note include
Reflect going 5 furlongs in 1:00 flat under James Graham for the Darley Alcibiades (G1). A maiden winner at Santa Anita and sixth in the Spinaway (G1) in her most recent start, Reflect is trained by Keith Desormeaux.

Trainer Wesley Ward worked
Bound for Nowhere (Shadwell Turf Mile-G1) and Happy Like a Fool (Thoroughbred Club of America-G2) 6 furlongs in company in 1:13.40.

Also working toward the TCA was
Awestruck, who covered a half-mile in :49.60 for trainer Rusty Arnold.