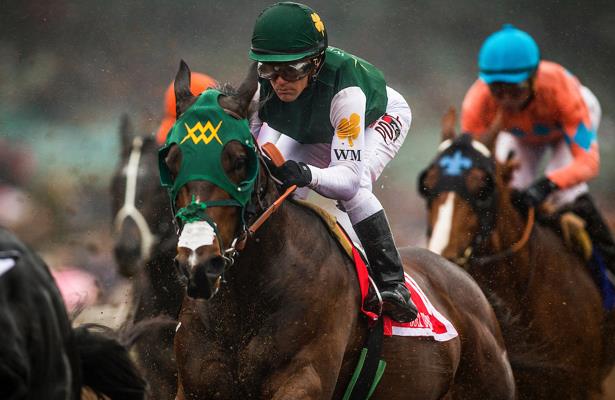 Multiple Grade 1 winner Bolt d’Oro, who disappointed when 12th in the Kentucky Derby, will get a chance for some redemption in his debut for trainer Steve Asmussen.

Transferred to Asmussen by owner and former trainer Mick Ruis, the 3-year-old son of Medaglia d’Oro has joined a growing list of 3-year-olds that could run in Churchill Downs’ Grade 1, $500,000 Clark Handicap on Nov. 23.

Spendthrift Farm, which will stand Bolt d’Oro at stud in 2019, announced the news Thursday after Bolt d’Oro clicked through five furlongs in 1:01.80 under the Twin Spires.

Bolt d’Oro worked another 5/8ths this morning @ChurchillDowns this time in 101.80 @theboltshow is being pointed to the Clarke Handicap Nov. 23rd. pic.twitter.com/dSJoSH8pto

Asmussen has already made winners out of two big names inherited this year, with Midnight Bisou ruled the winner of the Cotillion Stakes (G1) last out and Union Strike having taken Belmont Park’s Gallant Bloom (G2). The later is also owned and formerly trained by Ruis, who is based on the West Coast.

Bolt d’Oro posted his first work for Asmussen in September as he gets back into shape for his next start. The colt last raced June 9, finishing 11th in the Metropolitan Handicap (G1) while both cutting back and facing older horses for the first time.

Bolt d’Oro will meet his elders again in the Clark, but going 1 1/8 miles, the same distance as January’s Pegasus World Cup in which Ruis has expressed an interest in running his horse.

As for the Clark, it has been mentioned as an option for both McKinzie, the Bob Baffert trainee who could also run in the Breeders’ Cup Classic, as well as Hofburg, seen in both the Derby and Belmont Stakes.

Top filly Laurens the star on show as thirteen are confirmed...

editor - October 1, 2018
0
LAURENS is on the hunt for further Group 1 glory after she was confirmed for Saturday’s Sun Chariot Stakes. Karl Burke’s star filly will...

Gunnevera steps it up in 2018 Pegasus World Cup workout