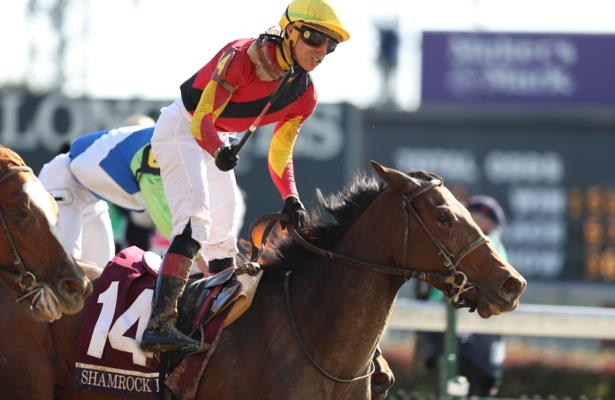 The seven-furlong dirt race for fillies and mares, 4 years old and up, drew a competitive field of eight, and is one of nine stakes on a 12-race program, sharing the spotlight with the main events, the $9 million Pegasus World Cup Invitational (G1) and the inaugural running of the $7 million Pegasus World Cup Turf Invitational (G1), the richest races on either surface in North America.

Among the challengers Shamrock Rose will encounter in the Fasig-Tipton Hurricane Bertie is Stonestreet Stables’ homebred Dream Pauline, a winner of three of four starts, including a determined victory in the Sugar Swirl (G3) at Gulfstream Park last month in the slop. Also in the field is local graded stakes winner, Stormy Embrace, who finished second in the Sugar Swirl for trainer Kathleen O’Connell.

Trained by Mark Casse, Shamrock Rose, a Pennsylvania-bred daughter of First Dude, earned her Filly & Mare Sprint crown with a determined late run that gave her a head victory at odds of 25-1. Irad Ortiz Jr., an Eclipse Award finalist for his outstanding 2018 season, has the return mount.

The Breeders’ Cup marked the filly’s fourth consecutive win, and was preceded by scores in the Raven Run (G2) at Keeneland; the La Lorgnette at Woodbine; and the restricted Malvern Rose at Presque Isle Downs. As a 2-year-old, Shamrock Rose won Woodbine’s Ontario Debutante in her career debut.

“I was so proud of her in the Breeders’ Cup. I always talk about Allen Jerkens and him saying, ‘run them while they are good.’ I think some people thought I was a little nuts running her back in two weeks in the Breeders’ Cup after she won at Keeneland, but like I told a friend, ‘this filly thinks she can beat anyone and until she proves otherwise, I’m going to believe her.’”

“I’m a big believer in confidence,” Casse said. “She reminds me a little bit of Tepin, who struggled at the end of her 3-year-old year. We gave Tepin a break and we brought her back and she was just so good.

“We brought Shamrock Rose to Presque Isle after her layoff and ran her against Pennsylvania-breds,” he added. “It was a fairly easy race, but she got so much confidence out of that after destroying the field. And then got confidence again by winning at Woodbine, which was against a solid field.”

The Kiaran McLaughlin-trained Dream Pauline, a royally bred daughter of Tapit out of the Grade 1-winning dam Dream Rush, has raced just four times in her career. The 4-year-old has won three of those starts, with her only loss coming when she finished third in the Dream Supreme at Churchill Downs in November. Her connections pre-entered their filly in the Breeders’ Cup Filly & Mare Sprint, but Dream Pauline failed to gain a berth in the field.

“She ran very well in the Sugar Swirl,” McLaughlin said. “We scratched her from the [Garland of Roses] in New York the week before because she drew the one-hole up there and the Sugar Swirl was a Grade 3. It worked out great. Javier [Castellano] said she was waiting a little bit on horses late, but she dug in and won. The only time she got beat was when she was unlucky and had a horrible trip at Churchill, running down inside and got checked a couple of times. She’s a very nice and professional filly.”

“I don’t think there is any problem with the seven-eighths,” McLaughlin said. “She’s tall. She’s out of Dream Rush, a very good sprinter, but Dream Pauline is going to want to go farther. We just haven’t been able to string her races together to that with her yet. She had a tiny little bit of an issue last January and we sent her to Ocala for 45 days and she came back. We pointed for a race and won and then we pointed her to the Prioress and she got a 104 [fever] the day before and we had to scratch. She’s really a nice sound filly with no issues, but just some weird things popped up.”

Dream Pauline, with Hall of Famer Castellano aboard, drew Post 2.

Awestruck, who finished second in the Dream Supreme, before finishing fifth in the Sugar Swirl, will start for owner G. Watts Humphrey Jr. and trainer George “Rusty” Arnold.

“We thought she was going to run really well in the Sugar Swirl and she didn’t,” Arnold said. “But I don’t think she is a true [six-furlong] horse. She just got down on the inside and had some issues in there and didn’t get a free run. I think seven-eighths suits her much better.”

Also entered are Blamed, a Grade 3 winner for Hall of Fame trainer Bill Mott; Pacific Gale, the third-place finisher in the Sugar Swirl; Victory Rally, the winner of the Geisha Stakes at Laurel in November; and recent Gulfstream Park allowance winner Ms Meshak.

editor - January 13, 2019
0
Racing’s ruling body should refrain from copying the Irish example in seeking harsher penalties for jockeys who fail drug tests and instead consider...

“This is what makes horse racing great.”