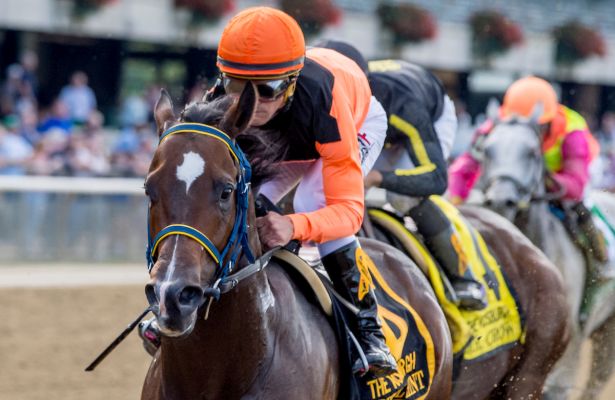 Luis Carvajal Jr. traveled to Churchill Downs with one horse and no groom for the Breeders’ Cup Sprint. But even after mucking out Imperial Hint’s stall and bathing the horse himself, the trainer said Sunday morning, “I don’t think it can get better than this.”

Perhaps only with a win in next weekend’s race.

Carvajal, who otherwise conditions claimers and allowance horses, is soaking in his time on the big stage with Imperial Hint, who put in his final breeze toward the sprint going an “easy half.” The trainer joked that for this horse, that often still means a quick time, which the stopwatch confirmed Sunday.

Clockers caught the 5-year-old son of Imperialism in 48.40 seconds.

“I was just happy to see him on the gallop out strong again,” Carvajal said. “I was really happy with the work.”

Imperial Hint enters the Sprint — a race in which he finished second last year at Del Mar — amid his best campaign yet. The horse has won three straight races, with his last two both convincing Grade 1 scores in New York.

The talk surrounding this contender, however, is his 0-for-2 record at Churchill Downs. The first time he ran under the Twin Spires, Imperial Hint was an inexperienced 3-year-old going a mile. The second time, he didn’t take to the slop on this year’s Kentucky Derby day.

Carvajal has said he wants to prove his charge will handle the surface in the Breeders’ Cup.

“You just need a little bit of racing luck, that’s it,” Carvajal said. “The horse is ready.”

Problem Solver earns a return to the Gold Coast

Martyn Meade bullish as Advertise guns for the July Stakes at...