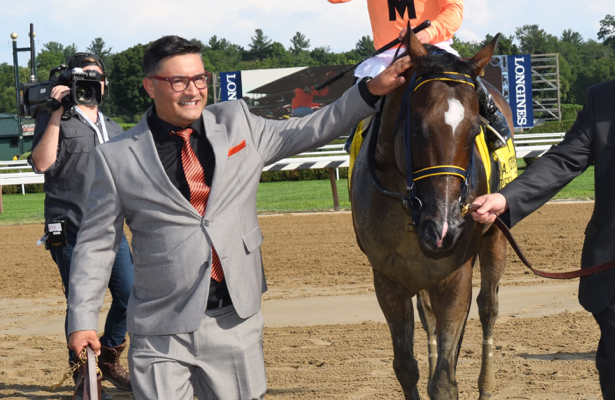 “Look at this. This is it,” Carvajal said, cracking a smile. “This is what you’re always looking for — a horse like this coming to the Breeders’ Cup. What more could you want?”

Read the past performances, and you’d assume Carvajal has one more wish: that the championships had not returned to Churchill this year. Imperial Hint is 0-for-2 under the Twin Spires.

“Actually, I wanted to come back here,” he said. “I want to prove that the horse can run here. We’ve had just a little bit of bad luck the first two times.”

At age 2, Imperial Hint ran 12th in the Pat Day Mile (G3) on the Kentucky Derby undercard. That was before connections knew he had such a proficiency going shorter. Back this year for the Churchill Downs Stakes (G2), Imperial Hint ran sixth on a sloppy, sealed track.

Since then, the 5-year-old son of Imperialism has reeled off three straight graded stakes scores, including a dominant run in Saratoga’s Alfred G. Vanderbilt (G1) that ranks as one of the most eye-catching performances of the year in any division.

Carvajal, who has all of 18 horses in his care, could saddle a Breeders’ Cup Sprint favorite.

“We’ve been here before, and I think we’re better prepared this time,” said the trainer, who saw his charge finish second in last year’s Sprint to champion Roy H. Eclipse Award honors should also go to the hero in this year’s edition.

“It’s a dream come true, because this business is very hard, especially for small barns,” Carvajal added. “That this horse happened to me is just a blessing.”

Carvajal stumbled upon Imperial Hint when out to see another horse. He noticed a colt small in stature that galloped well. Both traits still hold true. Coincidentally, his client, Raymond Mamone, previously owned the dam, Royal Hint.

It didn’t take Carvajal long to realize he had something special in a barn normally associated with claiming horses and the occasional allowance runner.

“I haven’t been training for too long — almost 10 years now — but I remember the first time he came to the track,” Carvajal said. “I thought, ‘I’ve never had a horse work like that.’”

Imperial Hint has won nine of his last 11 races, including four of five this year. The trainer says his horse is more mature, continuing to add muscle in his neck, shoulders and hind end. Just as important to Carvajal, mentally Imperial Hint has learned to relax in races.

Hall of Fame jockey Javier Castellano will be in the irons for the Sprint in a rematch with Roy H, who could also vie for post time favoritism. X Y Jet figures to set the pace with 3-year-old Promises Fulfilled.

The son of a jockey, who aspired to ride himself until he grew too large, Carvajal will keep instructions brief to Castellano, who, “once that gate opens will find the right spot for him.”

Carvajal maintains small strings at both New Jersey’s Monmouth Park and Pennsylvania’s Parx Racing. This horse, however, has led him to destinations like Saratoga and Del Mar. Next, the Churchill Downs winner’s circle?

“He’s taken me to many different places. I’ve met new people,” Carvajal said. “And to be in this kind of race, it doesn’t happen all the time. I wish it will.”

Plitvice on path to replace Privlaka

Sivills out to uphold purple patch at Newbury