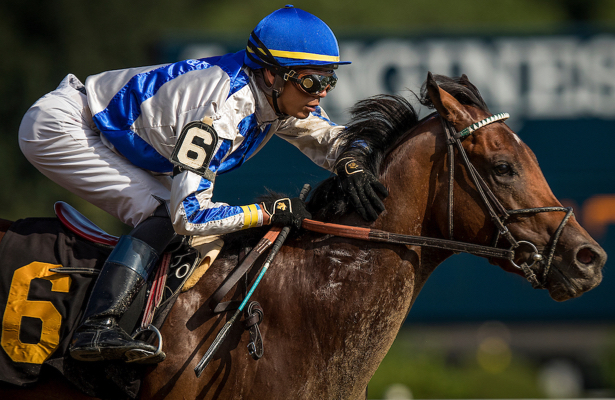 A field of eight 2-year-old colts hope to graduate and earn their first career Grade 1 victory in Monday’s $350,000 Hopeful Stakes at seven furlongs on the Saratoga main track.
Carded as Race 10, with a local post time of 5:38 p.m. ET, the 114th running of the Hopeful will be shown on Saratoga Live, presented by Claiborne Farm, airing nationally on FS2 from 4-6:30 p.m.
Adele Dilschneider’s colt Mucho enters after two strong performances since he first broke from the gate on an early Sunday afternoon on June 10 at Belmont Park. The colt by Blame was bumped at the start, but recovered quickly to finish second to Whiskey Echo then returned less than a week shy of two months where he was forwardly placed, running clear to best a field of seven by 9 3/4 lengths over the Saratoga main track for Hall of Fame trainer Bill Mott.

“Mucho is doing good,” said Mott. “He was quite impressive. I think he was kind of the buzz horse for a few days around here after winning. People were commenting on how nice he looked. I mean visually he looked impressive.”

Drawing post 7, Mucho will again have Jose Ortiz in the saddle.

Owner John Oxley will be represented by his Tapit colt Dream Maker who enters off his lone start where he was sent off as the even money favorite and responded like it by circling the field of five others with a strong last to first run in route to a three length win under Julien Leparoux on June 7 at Churchill Downs for trainer Mark Casse.

“We hope to go out with a boom,” said Casse. “He’s training real well.”

Dream Maker draws post 5, and will be rejoined by Julien Leparoux in the saddle.

|
Starlight Racing’s Sombeyay will be the veteran among the group bringing three starts into the race, and in doing so holds an extra trip to the winners’ circle over the others. The colt by Into Mischief broke his maiden by 6 ¼ lengths at first asking on April 27 at Gulfstream Park, then closed strong despite stumbling at the break and finished second three-quarters short to Our Braintrust in the $150,000 Tremont on June 8 at Belmont Park.

The Todd Pletcher trained colt returned to win the Grade 3 Sanford by a neck over Strike Silver on July 21 at Saratoga.

Sombeyay draws the rail as he did in the Sanford and will be ridden by Hall of Fame rider Javier Castellano.

Red Oak Stable’s Mind Control will ship north to Saratoga from Monmouth Park for trainer Gregory Sacco, and will make his third start after finishing second behind Call Paul in his debut at Delaware Park. The colt by Stay Thirsty returned to break his maiden by three lengths on August 12 at Monmouth Park.

Mind Control will break from post 2 and be ridden by Hall of Fame rider John Velazquez.

Calumet Farm’s Derby Date, the lone maiden in the field will look to win his first race in his third start at Saratoga after debuting at six furlongs and tiring to seventh on July 28. The colt by Will Take Charge, returned exactly two weeks later at seven furlongs and was caught late in the stretch settling for second. A trip to the winners’ circle would add to Hall of Fame trainer D. Wayne Lukas’s record eight career Hopeful victories and would give the 82-year-old horseman his second straight after he saddled Sporting Chance to victory last year. Lukas believes the best is yet to come for the laid-back, but talented Kentucky-bred.

“I just think he’s a pretty talented horse,” said Lukas. “He’s a real laid-back horse, a really quiet horse. He’s so laid back you almost worry about him. You can bring him out here, drop the shank, let him graze a little while and go get him a half an hour later. He doesn’t care about nothing. When the gates open he’s got it on the mind. He’ll be a little more focused, but he’s awfully laid back, almost to worry.

“I expect a real big effort, I really do. He had two outs. One that I don’t count, one that was very good, but just a bad trainer job. He got tired. You look at the replay, he did everything right except he got tired and that’s my fault not the horses fault. I do that a lot, run the horses, then I come back and run a little better. He got tired which is correctable, and it will. He won’t be tired.”

Derby Date will break from post 8 and will be ridden by Luis Saez.

How to watch, odds, post time, lineup and more