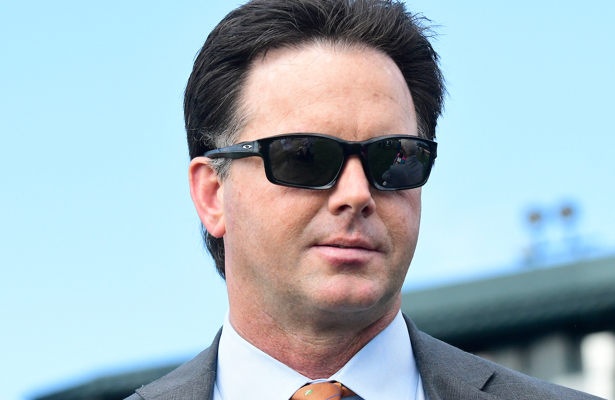 Heavy rain projected in Saturday’s forecast has some trainers concerned with how their charges will run on Fair Grounds’ stakes-packed card. Bret Calhoun is not one of them.

Calhoun expressed confidence that $150,000 Silverbulletday Stakes contender Cowgirls Like Us and Mr. Money, who goes in the Grade 3, $200,000 Lecomte Stakes will handle a wet track.

A Douglas Scharbauer-owned daughter of My Golden Song, Cowgirls Like Us will attempt her fourth straight stakes victory in the Silverbulletday. Two starts ago, she won over a sloppy main track at Retama Park in the La Senorita Stakes, which was originally scheduled for the turf.

“It’s a step up for her. She’s gotten in a zone,” Calhoun said. “She’s very good right now. Last race I thought was very impressive because it came off of a three-and-a-half month layoff and she should move forward from that. It was a solid race and she showed some improvement. Obviously she has run on an off track before. Hopefully if it all comes down to that it won’t bother her.”

Last out, Allied Racing’s Mr. Money ran fourth in the Breeders’ Cup Juvenile at odds of 41-1. Although the son of Goldencents has only raced over fast main tracks, he has trained well over sloppy goings. On January 3, he drilled through five furlongs in 1:00.20 on a wet surface.

“He’s worked very well over an off track, so hopefully that won’t be an issue,” Calhoun said. “He’s had a very good time since he arrived here, done everything we wanted him to do. Everything has gone right for us so far. It’s a wide-open race. We’re just hoping for a good trip and that he’s good enough.”

“Every surface is different when they get wet, so it’s hard to say how they’ll look,” Calhoun said. “It gives some comfort that they both seem to have handled it well. Him in the morning and her in the races.”

Mr. Money is out of the Tiznow broodmare Plenty O’Toole, whose grand dam O’Toole is a half-sister to 2009 Group 1 Dubai World Cup winner Well Armed. He is also from the same family as American Patriot, a Grade I winner on turf.

Also seeing stakes action for Calhoun is three-time winner Silver Dust who has been cross entered in the $75,000 Louisiana Stakes on the main track and the $125,000 Colonel E.R. Bradley Handicap over the Stall-Wilson Turf Course. Robby Albarado is named the rider in both races.

“I got it entered in the grass race in case it comes off,” Calhoun said. “We might catch some turf horses running on the dirt. He’s always been extremely talented. He’s a bit of a head case, but he’s won two in a row now so hopefully he’s getting it. I’ve seen him look like a superstar in the morning and not show up in the afternoon. He’s a very talented horse and hopefully he keeps his head screwed on tight. If he does, he’ll be very tough.”

Calhoun is nearing his 3,000th career victory. According to Equibase, he currently has 2,990 lifetime wins.

View From The Eighth Pole: Whipping Up A Frenzy – Horse...

Talking Horses: The odd case of two jockeys, a blow to...

Clare Balding on the Derby & Oaks